Wehrlein in action for Mercedes this week 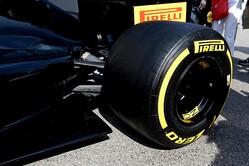 On Tuesday, Mercedes gets its first taste of the 2017 development tyres, as the German team begins a three-day test programme at Paul Ricard.

Rather than works drivers Lewis Hamilton or Nico Rosberg, it is Pascal Wehrlein who will not only get the first opportunity with the tyres but will be in action for all three days.

Indeed, according to Toto Wolff, Wehrlein will be the team's sole representative at the following tests at Paul Ricard (September 21 and 22) and Barcelona (October 12 and 13).

Asked whether Hamilton or Rosberg will take part in any of the tyre testing, Wolff told reporters: "At the moment it's not planned that they make the test. It's Pascal who is lined up, but maybe for the last one in Abu Dhabi it might change."

Ferrari and Red Bull have both already carried out testing with the 2017 tyres and the Maranello outfit will be on duty at Barcelona on Tuesday and Wednesday.

While the Italian team has not yet confirmed who will be on duty, Sebastian Vettel was on duty for the team when testing got underway at Fiorano in August, with Esteban Gutierrez completing the programme.