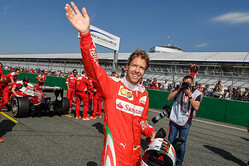 The Ferrari Racing Days event at Hockenheim closed in grand style today as Sebastian Vettel and Scuderia Ferrari put on an impressive display for the 7,000 spectators that included Ferrari supporters and motorsport fans in general. Over the course of the weekend more than 10,000 tifosi filled the Hockenheim grandstands.

Following the activities of the Corse Clienti: featuring the XX Programmes, the single seaters of F1 Clienti, and the 458 Challenge EVO of Ferrari Challenge Europe, today the spotlight belonged to the Scuderia and Vettel.

The four-time world champion shot off the starting grid with a spectacular simulation of a Grand Prix start; then demonstrated a few super-fast pit stops together with the mechanics of the Maranello team before indulging in a few high-speed runs and the obligatory burnouts with smoking tyres.

After an adrenaline-loaded half hour, spectators in the stands rushed to the paddock to take photographs and obtain his autograph.

In addition to the F2012 driven by Vettel, fans were able to enjoy the sight of the other cars of the F1 Clienti as they raced around the track. As one might expect, the cars of the Michael Schumacher era were eagerly awaited.

The audience was filled with excitement at the sight of the winning single-seaters racing at over 300 km/h, among them not only the F2002 and F2003-GA, but also the 248 F1, with which the legendary German driver came close to winning his eighth world title, which eventually went to Fernando Alonso.