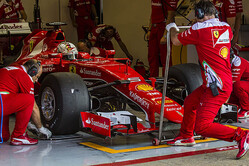 Two days of 2017 Pirelli tyre development testing at Barcelona have concluded, with Sebastian Vettel behind the wheel of a Ferrari mule car, modified to simulate the downforce levels of 2017.

Meanwhile a similar test at Paul Ricard, which began yesterday with Mercedes, continues tomorrow with Pascal Wehrlein in action for the third successive day.

Today's lap totals were 156 by Ferrari and 89 by Mercedes, which are added to yesterday's 111 and 134 respectively.

The next test session is due to be held on 21 - 22 September, where Mercedes will return to Paul Ricard, but this time with the 2017 Pirelli wet tyres.