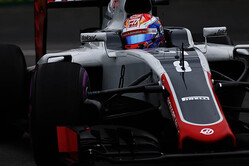 Taking pole for the Malaysian Grand Prix was Mercedes driver Lewis Hamilton. His fast lap of 1:32.850 was the quickest in the last 11 years at Sepang and .414 of a second better than that of his teammate and championship leader, Nico Rosberg. It was Hamilton's 57th career Formula One pole, his eighth of the season and his fourth at Malaysia. Rosberg holds an eight-point advantage over Hamilton in the championship standings heading into the Malaysian Grand Prix.

Before Gutierrez, Grosjean and the rest of their Formula One counterparts participated in knockout qualifying, they had one final practice session (FP3) to dial in their racecars for a quick lap around the 5.543-kilometer (3.444-mile), 15-turn track.

Haas F1 Team's strategy for its drivers during the 60-minute session was to sample each tire compound available from Pirelli - the P Zero Orange hard, the P Zero White medium and the P Zero Yellow soft - a combination that was last seen in early July for the British Grand Prix at Silverstone Circuit.

Installation laps were completed using the Orange hard tire before switching to the White medium for some flying laps. Gutierrez performed six tours on this compound while Grosjean made eight laps. The stint saw both drivers test the limits of the resurfaced Sepang layout, with Gutierrez taking a spin at turn 15 on his sixth lap and Grosjean running off track at turn six, also on his sixth lap.

For their last FP3 stint, the Yellow soft tire was utilized to gain final data prior to qualifying. Both drivers logged their fastest laps on the softs - Gutierrez with a 1:36.553 on his 10th lap and Grosjean with a 1:36.687 on his 12th lap. Those times put the Haas F1 Team drivers 13th and 15th, respectively, upon the completion of FP3.

Quickest in FP3 was Hamilton, who drove his Mercedes to a fast lap of 1:34.434, which was .445 of a second better than the Red Bull of Max Verstappen. Verstappen went on to qualify third, .570 of a second off Hamilton's pole-winning time.

Romain Grosjean: "I've been struggling all weekend long to get the balance where we wanted, and finally we got a decent car balance. We had to change so much on the car, which is a bit strange, so we need to analyze a bit more deeply what happened. Eventually, I was pretty happy with the car. We had a bit of an issue at the end of Q1. We left the garage very tight on time, so the team asked me to push really hard on the out lap, which isn't ideal for the tires. But, we made it and everyone was pleased with that. In Q2 we tried something a bit different. It didn't quite work as expected, but tomorrow is a long race so we'll see."

Esteban Gutierrez: "Qualifying was very competitive. We worked all the way through FP3 trying to optimize the setup of the car and I was ready to go. I was saving all my energy for the last lap in Q2, which was going to make all the difference. I had a perfect lap, but I'm a bit disappointed as I took a lot of risks and tried to push much further than what was possible. I went a bit wide in turn 14 and that was it. I'm sorry for the guys as they've worked so hard over the weekend, but we'll keep focused and I'll be pushing all the way in the race."

Guenther Steiner: "I think we did the best we could to finish up P12 and P13. We struggled getting prepared for qualifying, but both the team and the drivers got it together. We seem to like to put some drama into whatever we do. With Romain in Q1 we were on the edge trying to get him out in time. First we lost a mirror and then a wheel nut got stuck on his second run. The guys did a fantastic job to get it sorted and Romain was able to cross the line one second before time was up. Esteban did a great job. The cars are very close to each other - within one tenth of a second, in fact - which shows that both drivers can compete at the same level."