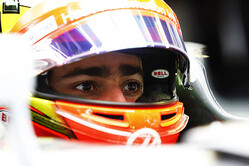 Getting there, however, was not easy. Grosjean spun and backed into the turn 10 wall near the end of Q2, and with the Virtual Safety Car (VSC) being deployed, Gutierrez wasn't able to finish his flying lap that had the potential of bettering his Q2 time. Grosjean was unharmed in the accident, and his Haas VF-16 is repairable.

Taking pole for the Singapore Grand Prix was Mercedes driver Nico Rosberg. His fast lap of 1:42.584 was .531 of a second better than Red Bull's Daniel Ricciardo. It was Rosberg's 29th career Formula One pole, his seventh of the season and his first at Singapore. Current championship point leader Lewis Hamilton, who holds a scant two-point advantage over teammate and nearest pursuer Rosberg, qualified third.

Prior to qualifying, teams had one final practice (FP3) to prepare their cars for the session and Sunday's 61-lap race around the 5.065-kilometer (3.147-mile), 23-turn circuit. The hour-long track time was especially welcome for Haas F1 Team, as Friday's two practice sessions (FP1 and FP2) saw limited running for Grosjean. After accumulating only 14 laps between FP1 and FP2, Grosjean was able to log a solid 20 laps Saturday in FP3. Gutierrez, who enjoyed trouble-free running on Friday, continued in that manner, tallying 16 laps in FP3.

The qualifying simulation on the grippiest tires in Pirelli's lineup predictably delivered the quickest times. Gutierrez's fast lap of 1:46.316 was set on his 14th tour, earning him the 13th quickest time. Grosjean's best time of 1:47.411 came on his 17th lap, placing him 18th overall.

Mercedes driver Nico Rosberg topped the FP3 timesheet. His best lap of 1:44.352 was .059 of second better than that of Red Bull's Max Verstappen, who was quickest in FP1 on Friday.

Romain Grosjean: "I don't know what's going on, to be fair. Yesterday we had issues, we were struggling. I spun the car and crashed yesterday and ended up doing the same again today. That's not my style of driving, to do that twice in two days. There's something not quite right, so we really need to analyze what it is. We've been trying to resolve the problem. It was qualifying and I was pushing at 200 percent. It's just been a weird weekend all along."

Esteban Gutierrez: "FP3 was much better in terms of car balance. We used the morning session to evaluate certain things and I think we found a good compromise considering we had an updated aero package. Qualifying was very frustrating. It was a missed opportunity. I was preparing myself for that lap and I believe I would've had the opportunity to fight for Q3 if I could've completed it. We were really unlucky today. However, I'll take the feeling I experienced during the first part of the lap into tomorrow for the race."

Guenther Steiner: "The weekend is getting more and more challenging. I hope tomorrow we'll do better. Esteban did a good job to set his car up in FP3. Romain still struggled, obviously. But then in qualifying, through Q1 and until he crashed, he was doing a good job. He was very close to Esteban with very little running. We need to investigate why we crashed. Fourteenth and 15th are fair positions. It's where we should start from considering the weekend. This is always a race where a lot of things can happen, and because a lot of stuff has happened to us already, we hope we can avoid further incidents and take advantage of those situations. These are the ups and downs of racing. I'm sure the guys will do their best to get the car together again tonight, and do the best they can for Romain to have a good race."