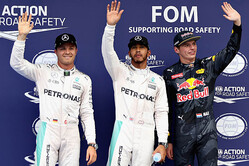 Lewis, pretty close to the fastest ever lap of this Sepang circuit and I guess the word for that lap is emphatic. You must be very pleased with the performance today.
Lewis Hamilton: Definitely. Firstly, I want to say a big thank you and send out a lot of love to the fans that have turned up here; a lot of British flags here and support for Petronas and our team, so a big thank-you. And secondly, a huge thank-you to the team who have continued through the whole year to improve and to come here... I mean this year, it's definitely the best the car's been here and of course, this year the car is obviously better but great work done, coming into this weekend and obviously the last few weeks with Nico's wins. But today the car felt fantastic. I really enjoyed the lap.

And the lap, just a few details on it?
LH: Yeah... could have been faster.

Nico, obviously the pressure was on after that first run in Q3; you were down in fifth place. The final corner seemed a bit of an issue today for you. Did you go out on that final run just making sure you secured a front row start ahead of the Red Bulls or did you think you were going for pole on that final run?
Nico Rosberg: Of course I'm going for pole. What else would I be doing out there? But Lewis's lap was very quick so it was always going to be difficult. I would have come close but unfortunately I had a mistake in the last corner, something just wasn't going right there in that last corner. I couldn't get the settings right, always got a big oversteer moment into there but anyways, second place, got to live with that now. As we know from this year, second place doesn't mean that victory is not possible tomorrow. We've seen that so many times. Still very optimistic for tomorrow.

Max, obviously qualifying ahead of your teammate. Your long run performance yesterday looked particularly fast. Do you feel that you can go out there tomorrow and beat these guys?
Max Verstappen: I don't know. I think the whole weekend has been quite positive for me. We definitely made some changes after Singapore and it seems to work. Yeah, long run pace looked promising; short run, yesterday we needed to improve and I think we found a good set-up with that for today and of course very pleased to qualify behind the Mercedes cars.

Coming back to our pole-sitter, Lewis Hamilton, obviously the qualifying pace advantage of Mercedes is clear but as we were just saying, the Red Bulls and the Ferraris did look pretty close to you yesterday in the long run performance. Do you expect a tough battle tomorrow from Ferrari and Red Bull?
LH: Yeah. I think they're going to be very quick, they've been quick all weekend. Just to go back to my last answer, of course I'm very very happy and grateful for my lap but you always want to finish the last lap and that's what I said but I think there's more time there. But I think tomorrow, providing the conditions are like this, the track's generally... the course is better, it's a lot smoother and seems to work better with the tyres than it has done in previous years so I think it will be a close race, for sure, because I think they have very good long runs but I think we are looking quite strong also. So hopefully that's the case tomorrow.

Back to our pole-sitter, Lewis Hamilton, Lewis you touched on it there in your final answer but I wonder if you could dig down a little bit more in detail. Give us the changes to the surface, the changes to the camber of the corners; how different is the feel to the driving here this year? How different is it to previous years and what's the feeling like?
LH: Honestly it does feel better. I was a bit sceptical when I came in, I wasn't very sure why they made changes because the track generally felt pretty good before but it did have bumps in it which... I generally like that, I think that's a sign of character in a circuit but it's a lot smoother now which I enjoy as well. There are still a couple of bumps, before turn nine. As I said, it works better with the tyres, it's just a little bit smoother, I bit better with the flow. The car, I would say, is a bit less sliding. And then the last corner, it's not a lot, not a huge amount different. It was always a challenging corner. You've seen in the past, there were always lock-ups there so it's just that there's a slightly different line that you take and right at the apex of the corner is not a place you want to be, there's no rubber there because no-one's driving there. It's not that easy to get there.

Going back to you, Nico, obviously strategy was a big story here twelve months ago in this Grand Prix. Do you expect that again tomorrow? Obviously you've got to run the harder compound, do you expect to see some variation in the way that the top teams attack this race tomorrow?
NR: Well, it's only between the medium and the hard really, so yes, it's possible that we could see some variation. Depends maybe also on the temperatures and everything but I don't think it's going to be too exciting strategy-wise because the tyres are pretty similar so I don't think it's going to have such a deciding factor.

And Max, it looked like you and your teammate both aimed to save a set of soft tyres in Q1. You did go out right at the very end but you never actually put a quick lap on those tyres so they are essentially new. Once again, Red Bull trying something a little different on the strategy as you did in Singapore?
MV: We don't know yet. We just keep all the options open and yeah, it felt quite a good balance on the soft tyres as well – actually on all the compounds it felt good on the long runs. It just depends a bit on the temperature tomorrow and then from there on in the race we will decide what we will do.

(Livio Oricchio – GloboEsporte.com) Lewis, you have already done some fantastic laps in qualifying this year but you finished the first lap in fifth or sixth position. You had problems at the start. Did you make a special preparation for this race? Is there an improvement in the clutch system of your car?
LH: In the clutch system? It's the same one we've generally had all year so there's no changes to it, it's just race-on-race we're trying to understand it a bit more and more and trying to predict what it's going to deliver etc. Nico got a great start... we've both generally got good starts in the last race so we are improving gradually.

(Louis Dekker – NOS.NL) Max, after Belgium, Italy and Singapore, is there any confidence left for a good start tomorrow?
MV: I always have confidence, even if I drop back to last.