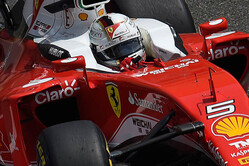 Sebastian Vettel has dismissed claims that frustration with Ferrari is causing him to overdrive.

Last weekend's clash with Max Verstappen and Nico Rosberg at the first corner was the German's second first-lap retirement-inducing accident of the year, however there have been other clashes, most notably at Spa, where along with the Dutch youngster, Kimi Raikkonen was also involved.

The Sepang incident, in particular, has led to claims - not least by this site in its latest podcast - that in his growing frustration with his team Vettel is overdriving the car.

"I'm a bit surprised when you say you've never seen me like this," he told reporters. "I think I've attacked a lot of cars in all the starts I've done in my life into Turn 1, and most of the time I got away with it.

"Sometimes I didn't," he continued, "and I guess last week was one of those occasions where it didn't work."

"I see where you might come from," he said of the claims. "But I explained already what happened last week, I don't think there's so much to analyse. You try to squeeze out everything from the car you can, sometimes you find yourself overdriving, because you always try to achieve the best and sometimes you push too hard. It's normal, it's human.

"Sometimes you don't push enough, so it's about finding the sweet spot in the middle."