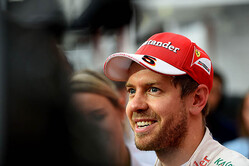 Ferrari has taken advantage of Sebastian Vettel's qualifying disaster by giving the German a new engine and gearbox.

A broken right-rear suspension link meant the German was unable to post a competitive time in Q1, and will therefore start today's race from the back of the grid.

While starting from the back row on a street track represents the very worst case scenario, the Italian team pondered whether it might take advantage of the situation by giving Vettel a new engine without penalty.

Already on his 5th ICE, turbocharger and MGU-H, the opportunity provided in taking new components without penalty, even if he is to merely add them to his component pool, seemed too good to miss.

"It's one of the things that we are having a look to try to understand what makes most sense," the German told reporters last night.

"So far we have done a mega job not having to use another power unit," he added. "Obviously I would prefer it that way, and being higher up on the grid, but now it is something we are looking into to see whether it makes sense."

This morning it was confirmed that Ferrari has indeed opted to fit a new ICE, turbocharger, MGU-H and gearbox.

As none of the changes conform with Article 23.4a, 23.4c or 23.6a of the Sporting Regulations there will be penalties... but he is already at the back of the grid.