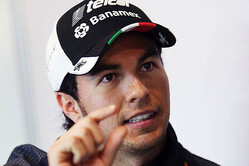 Sergio Perez is under investigation for two incidents during Q2.

Both incidents relate to the yellow flags that followed Romain Grosjean's crash and Jenson Button's clash with the barriers.

While the Mexican has defended both incidents, Felipe Massa and Valtteri Bottas, whose team is fighting Force India for fifth in the standings have criticised Perez, insisting that he benefited – making the cut through to Q3 – while they paid the price by slowing for the flags.

As the stewards investigate, Force India has already been fined 200 euros after Perez was adjudged to have exceeded the pitlane speed limit during Q2.