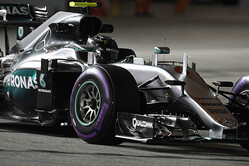 Mercedes driver Nico Rosberg has claimed pole position using the ultrasoft tyre, following a thrilling qualifying hour around the floodlit streets of Singapore. Rosberg's time of 1m42.584s was the fastest lap ever seen at Singapore since the race was inaugurated in 2008, beating the previous benchmark of 1m42.841s from Sebastian Vettel in 2013 during qualifying.

As expected track temperatures fell as each Qualifying session continued. Most drivers were straight onto ultrasoft from the start of Q1, with the exception of Toro Rosso. Carlos Sainz was actually the only driver to set his best Q1 time on the supersoft (around 0.9 seconds per lap slower than the softest compound available).

Last year's pole position time was already broken in the early stages of Q2, where all the drivers used ultrasoft apart from Red Bull, which went out on supersoft from the beginning. Both drivers set their best time on this compound, which means that they will be the only ones in the top 10 to start on the supersoft.
Rosberg's ultrasoft pole time came during his first run in Q3, while Red Bull's Daniel Ricciardo claimed P2 on the grid during his second run.

With six out of the eight Grands Prix held so far in Singapore won from pole position, qualifying was an extremely important session. However there has never been a race without a safety car at Marina Bay, which clearly has potential to mix up the strategy variables.

Paul Hembery, Pirelli motorsport director: "We witnessed qualifying sessions with some surprises from start to finish. Strategy already came to the forefront from Q2, when Red Bull opted to run on the supersoft to set their fastest times. As a result, they will be the only starters in the top 10 to begin the race on this compound, which means that they can run an alternative strategy. We'd expect to see at least two stops per car tomorrow, but this is always one of the hardest races to predict."

How the tyres behaved

Soft: Used at the start of Q1 by Manor: may figure in some alternative race strategies.

Supersoft: Used only by Red Bull in Q2, meaning that they can run a longer first stint.

Ultrasoft: Used to set pole position and mostly by everybody during Q2 and Q3.