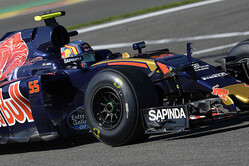 Pirelli has shelved its plan to introduce a new, softer compound this season.

The new compound, aimed at being more resilient when drivers ride the kerbs or run over debris, was trialled in the Friday sessions at both the Belgian and Italian Grands Prix.

However, while Pirelli insisted that the new compound would not affect performance, some of the teams were unconvinced.

"We analysed all the data but unfortunately we had some inconsistency across the teams," Pirelli's technical boss Mario Isola told reporters in Singapore. "The feedback was not the same for all the teams, so we have decided to keep the current specification until the end of the year.

"However, we feel that this concept, the concept that was in the prototype, was something that we have to consider for 2017 tyres. So we will probably continue to develop this idea for next year’s tyres which we will test in 2017 prototypes, with the big size, on the mule cars.

"In some cases, the tyres were not tested properly," he insisted, "as it was not a back-to-back between the current specification of the soft and the prototype. Therefore we want to have a proper test and it will happen with 2017 tyres, comparing the base against the prototype, in the same conditions, on the track, for the same number of laps, on the same fuel loads and with the same set-up. This is a proper comparison where we can understand the performance of the tyre."