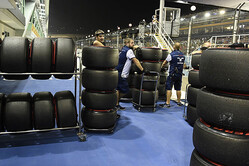 For the only true night race of the calendar, held on the stunning streets of Singapore, Pirelli's P Zero Purple ultrasoft tyres make a return for the first race since Austria, alongside the supersoft and soft. The three softest tyres in the P Zero range have been selected to cater for the unique demands of the Marina Bay street circuit: a long lap, fluctuating track temperatures, and a physically demanding race for both drivers and cars. With the barriers so close to the side of the track, no mistakes go unpunished during this two-hour marathon held in humid conditions.

The circuit from a tyre point of view

Singapore has the highest number of corners of any circuit all year (23) but is the second-slowest lap after Monaco: placing demands on tyres in terms of cornering, braking and traction.

The surface is typically bumpy, also with street furniture such as painted lines and manholes.

Being run at night, track temperatures don't evolve in the usual way seen at a daytime race.

Pit stop time is long due to a lower speed limit and long pit lane: a key strategic consideration.

Ferrari has gone for the most aggressive tyre choice, with a maximum allocation of ultrasoft.

Following some minor changes to the circuit in 2015, there are no big alterations this year.

Red supersoft: a versatile compound, which proved to be a key element of last year's race.

Purple ultrasoft: designed to offer a considerable pace advantage: will be used in qualifying.

Ferrari's Sebastian Vettel won with a two-stop strategy, starting on supersoft, switching to supersoft again on lap 13 then soft on lap 37. There were two safety car periods.

Best alternative strategy: Toro Rosso's Max Verstappen went for an alternative two-stopper (supersoft-soft-supersoft) to finish eighth from a lap down after the start.

Paul Hembery: "Singapore is probably the most spectacular circuit that we visit all season, and this year we hope to make it even more special with the arrival of our rapid ultrasoft compound, in order to maximise the speed and grip available at the Marina Bay track. This is one of the most unpredictable races of the year - it's the only track with a 100% safety car record - so all the complex variables inevitably throw up opportunities for teams to do something creative with strategy. In terms of competition, it looks set to be one of the closest races we will see all year, where tyre management will make a big difference."