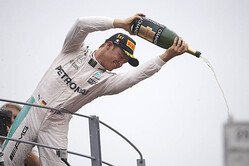 Mercedes driver Nico Rosberg won the Italian Grand Prix from second on the grid using a one-stop strategy - which has been the winning strategy in recent years as well - starting on the P Zero Yellow soft tyre, and then switching to the P Zero medium halfway through the race. His team mate Lewis Hamilton finished second with an identical strategy.

In fact, Rosberg and Hamilton were the only two drivers who qualified in the top 10 to start the race on the soft tyre, which gave them the possibility to drive a longer first stint than the supersoft starters. This formed the key strategic battle for the podium.

A variety of one and two-stop strategies were seen throughout the race as expected, with the two Ferraris following identical sprint-style two-stoppers: a pair of opening stints on the supersoft followed by one stint on the soft.

Red Bull's Daniel Ricciardo tried an alternative two-stop strategy, taking the supersoft tyre at the end of the race in order to attack Williams driver Valtteri Bottas on the soft tyre. Another alternative strategy was that of Romain Grosjean: the sole driver to finish the race with a soft-supersoft strategy.

Manor's Esteban Ocon was the only driver to begin the race on the medium tyre. This meant that for the second race in succession, all three compounds nominated were seen on the starting grid as well as at the finish, having performed perfectly from lights to flag.

Paul Hembery, Pirelli motorsport director: "Tyre strategy formed a key part of our home race, with an exciting start putting the accent further on tyre tactics. Although Lewis Hamilton lost the advantage of pole position at the start, tyre strategy meant that he was up to second position before the halfway point of the race and was able to retain it. From there on it was a strategic battle for the podium with the two-stopping Ferraris. Before the next grand prix in Singapore, we will be hard at work in Barcelona with Ferrari and Paul Ricard with Mercedes this week as we continue to test the wider 2017 tyres with mule cars."

We predicted that two-stops was the theoretically fastest solution (adopted by Ferrari) but Mercedes was able to turn a one-stopper - the second-fastest solution on paper - into a winning strategy. Rosberg followed the one-stop format we expected, starting on soft and switching to medium on lap 24.