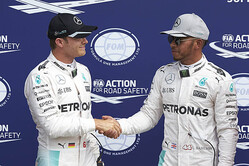 Following this morning's final free practice session, Mercedes boss Toto Wolff was asked by Sky Sports F1 if he thought Ferrari might still have something in reserve. Whilst admitting that he only thought the Italian team might, added that his own team certainly did.

With a gap of 0.938s between pace-setter Lewis and Hamilton and third placed Sebastian Vettel this will be bad news for the tifosi.

Not for the first time, the timesheets have a symmetrical appearance with Mercedes heading Ferrari, Williams and Red Bull.

With Williams treating Friday's session as it always does - a test session - to see Valtteri Bottas and Felipe Massa leapfrogging the Red Bulls earlier came as a bit of a surprise. That said, perhaps a string of disappointing performances culminating in losing fourth place in the standings to Force India last week has kicked new life into the Grove outfit.

Despite the gap between Mercedes and Ferrari, hopefully all is not lost. The Italian team usually does have a trick up its sleeve for its home race, while the car is kinder to its supersofts than the aerodynamically perfect, but so demanding Mercedes.

As ever, Mas Verstappen was involved in a couple of incidents this morning, both at Ascari. In the first he blocked Nico Rosberg, who was on his first flying lap, while in the second it was he who was blocked, this time by Kevin Magnussen.

Behind the leading four teams lies a very tight midfield with the Force Indias leading the way. Esteban Gutierrez split the pair in FP3, Haas down to one car after Grosjean got beached in the gravel at Ascari early in the session.

To compound the Frenchman's woes he needs a new gearbox and thereby incurs a 5-place grid penalty.

McLaren is looking strong as does Renault, certainly compared to yesterday.

Sauber continues to find its feet following its takeover, while Toro Rosso is still floundering at a(nother) circuit where it expected to.

As in Spa, it will be interesting to see if some drivers opt to try and qualify on the softs as opposed to the supersofts, and whether some driver, as in Spa, ultimately change their minds.

In an interesting move, Pirelli has reduced tyre pressure by 2psi following yesterday's sessions, the manufacturer revealing that the reason is that it found 100kg more force on each front tyre compared to last year, while the estimated top speed is 10km/h quicker.

Last time a driver other than the pole-sitter was to win here was back in 2009 when Lewis Hamilton took the coveted position but Rubens Barrichello went on to win the race.

The lights go green and Wehrlein gets things underway, followed by Magnussen, Palmer and Kvyat.

A mistake at the first chicane sees Magnussen run wide thereby ruining his first flying lap at the outset. He crosses the line at 1:25.074.

The Ferrari-powered Haas duo go first and second, Gutierrez leading the way with a 23.984.

Local hero Vettel, and former local hero Alonso, head out. Both get a warm reception form the crowd.

Warm, is not however, how you might describe the look on Sergio Marchionne's face. It has that 'wait until I get you home', look about it.

Rosberg gets things serious with a 22.497 as Ocon grinds to a halt at T1 thereby bringing out the yellows. The French youngster reports he suffered an electrics issue.

As Verstappen begins his first flying lap, Massa goes third ahead of Button.

"So far, it looks like Hamilton will be hard to beat," admits Pirelli. "Last year he claimed a grand slam: pole, race win and fastest lap."

With 5:00 remaining, Alonso, Grosjean, Palmer, Magnussen, Ericsson and Ocon comprise the drop zone. Ocon, of course, will play no further part in the session.

Beautiful slide from Grosjean. Mind you, it will cost him precious time. That said, it doesn't he goes ninth (23.421) just behind his Haas teammate.

All but Magnussen posts PBs in S1 as the final assault gets underway, while it is Palmer who loses out in S2.

Alonso improves to 14th, but is demoted by Wehrlein and Hulkenberg, however, he makes it to Q2 by the skin of his Spanish teeth.

Interestingly, all but the Ferraris ran on the supersofts in Q1, even the Mercedes.