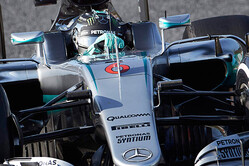 In the old days, Monza typically marked the start of the silly season, sadly, these days said season appears to last all year. Indeed, as opposed to drivers being announced, all we have had so far is confirmation of Felipe Massa's retirement.

Despite the fact that attention has now turned to 2017, Monza, being the unique track that it is, warrants a few updates.

While Ferrari is understood to have used the last of its engine tokens, no doubt hoping to please the fans on home soil, Haas has opted for the strangest of rear wings.

There is only one reserve driver on duty this morning, Alfonso Celis replaces Nico Hulkenberg at Force India.

Tyre compounds this weekend are medium, soft and supersoft.

The lights go green and Sainz leads the way, followed by Kvyat, Wehrlein and Vettel.

As in Belgium, Pirelli has brought its unmarked prototype tyres, each driver given two sets for today's sessions.

To the delight of the tifosi, Raikkonen is among the early risers... Massa and Verstappen the very last to appear.

Sporting the Halo, button posts the first time of the day, the McLaren driver crossing the line at 1:28.922. He is watched by new team CEO Jost Capito who is wearing team colours for the first time.

As Verstappen heads out, Bottas goes quickest (28.527), ahead of Button, Rosberg and Sainz.

As Hamilton goes quickest (25.124), Rosberg warns of an issue with a light on his dash.

Despite his issues, Rosberg retakes the top spot with a 24.946 as Wehrlein looks to be the fifth driver to post a time.

Perez goes fourth (26.353) ahead of Button, as Ocon and Celis become the latest to post times.

Magnussen, fresh from his very heavy crash at Spa, posts 28.691 to go sixth.

"FP1 is usually the trickiest session of the weekend," claims Pirelli, "track tends to be 'green' and slippery, with no rubber laid down."

In as surprise move, just 26 minutes in, both Mercedes drivers switch from the prototype tyres to the supersoft. Rosberg immediately posts 23.736.

Ricciardo runs wide at Ascari, this being a circuit that will not particularly suit the Red Bull.

Told that his tyres are "robust", Rosberg is advised that his current run has been extended.

Rosberg gets it wrong at the first chicane, taking a pounding as he rides the kerbs on re-entry.

As the opening phase of the session comes to an end, the drivers head back to the pits to return a set of tyres. That said, the Toro Rosso duo remain out on track, both on the prototype tyre.

Hamilton currently tops the timesheets, ahead of Rosberg, Vettel, Perez, Raikkonen, Verstappen, Bottas, Ricciardo, Alonso and Button. Massa is the only driver yet to post a time, the Brazilian understood to be suffering a power unit issue.

Sainz rides the kerbs after missing the second chicane.

Having gone wide at Ascari, on the prototype tyres, Verstappen complains that it feels as though he has less grip.