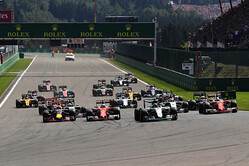 Having been let down a few times already this year, we are doing our level best not to get our, and thereby your, hopes up.

However, the fact is there is a real sense of anticipation surrounding today's race.

Despite heavy storms overnight the campsites kept rocking and from first light fans were queuing at the various access points.

Be it the thought of Max Verstappen, starting from the front row for the first time ever, taking a famous home win or Lewis Hamilton storming through from the back row to a podium place, there is plenty to have fans salivating.

Add in the prospect of a revitalised Ferrari, and its new star Kimi Raikkonen, not to mention the possibility of a major upset courtesy of Force India and the possibilities are endless.

With the weather gods looking less and less likely to intervene, and the unusually high temperatures set to continue, not for the first time the main focus of attention is tyres.

Since the first session on Friday it was clear that the temperatures here were set to cause problems and those teams that had opted for a more aggressive supersoft strategy were looking vulnerable. Sure enough, the red-banded tyres have been degrading at a hitherto unheard of rate with some drivers complaining that they aren't good for an entire lap.

Then there are the mandatory tyre pressures set by the FIA, which the drivers claim are too high for the conditions and are making controlling the car nigh impossible.

Perhaps Jenson Button summed it up best when he described the situation as "crazy".

Despite the problems with tyres however, some, most notably Verstappen, opted to use the supersofts in Q2 to post their fastest times, meaning they must use them for the start of today's race.

Surrounded by the likes of Rosberg, the Ferraris and even his own teammate, Daniel Ricciardo, who are all on softs, the opening few laps could well decide the race for the youngster.

"To split them made sense," said Christian Horner. "When we put it open to the table, Max was keen to start on the supersoft and Daniel was keen to start on the soft, which made the situation very easy. The drivers and their respective engineers picked the strategies, and from my perspective and a team point of view it covers both options. We'll know tomorrow which one is the right way and which is the wrong way."

Interestingly, for once, Pirelli is not predicting possible tyre strategies, which should tell us something.

Of course, other than tyres - we'll get to track limits later - the other big factor this weekend has been engines... and engine penalties.

As expected, Lewis Hamilton has had numerous changes of engines and components and will therefore start from the back of the grid. Following his early season issues it was always known that we would arrive at this point, therefore how tiring to hear sections of the media - mainly British - complaining.

Surely it is better to take the hit here, a circuit he loves and where overtaking is entirely possible, than a number of penalties at different circuits where it is difficult to pass.

On the other hand, Fernando Alonso also starts from the back of the grid. However, the Spaniard's three engines were not down to choice. That said, the fact teammate Jenson Button starts from ninth offers hope for the future.

Of course, Hamilton's penalties, and Verstappen's achievement means that Nico Rosberg's pole-winning lap went largely unrecognised, indeed, some are claiming it as 'hollow', a word that will be used again should the German go on to win.

However, fact is he took pole and on the soft rubber to boot. Furthermore, surely it is in our interest that he closes the gap to his teammate this weekend, thereby ensuring Hamilton doesn't wrap up the title before season end.

Two of the saddest sights of the weekend, were Daniil Kvyat watching yesterday's GP2 race in the Toro Rosso motorhome. As he looked on, Pierre Gasly took an easy victory and possibly a major step towards replacing the Russian at Toro Rosso next season.

Then there was Rio Haryanto on 'meet and greet' duty for Manor, the, underrated, youngster bringing to mind those internet memes of Fernando Alonso last year... place I would rather be.

As we said in our most recent podcast, F1 is a cruel theatre.

Befitting this majestic circuit we've had some real classics here over the years, and quite a bit of controversy, and with that in mind we cannot help but feel that with today's temperatures and the resultant impact on tyres we could be in for a thriller.

Romantics will want to see Hamilton storm through the field, or maybe Max take that home win, or how about seeing The Iceman back atop the podium. But let's not forget the ever-popular Vettel, the Force India duo or even sweary old Seb.

Then there's the 2017 factor. For as the team switch focus to the design and construction of their 2017 contenders, a number have yet to finalise their line-ups, so what better opportunity for the likes of Daniil, Valtteri, Kevin and co to show what they can do.

As for track limits, the FIA has installed its infamous sensors at a number of corners including one on the exit of Eau Rouge. Once a couple of drivers had their Q1 times deleted yesterday things appeared to calm down, but once the red mist appears later this afternoon, who knows...

Getting a hopefully intriguing afternoon off to an early start, there were claims that Hamilton would start from the pitlane after a seal was removed from his gearbox in breach of the pre-race parc ferme regulations. However, the FIA subsequently confirmed that the seal was not removed under such conditions and the Briton instead would take a further 5-place grid penalty. Ho hum.

In a late move, Sauber opts to have Ericsson start from the pitlane.

With an eye on the slightly cooler temperatures, Pirelli claims the quickest strategy today is a two-stopper, with two stints on soft, plus one stint on mediums.

Ahead of the warm-up lap, the crowd applauds, the grandstands and spectator banks absolutely packed - not even Jeremy Corby could find a seat.

At the back, Alonso and Hamilton are both on mediums, Verstappen, Perez, Hulkenberg, Bottas, Button, and Massa are on supers, the rest are on softs.

The grid slowly forms, Hamilton, in particular, taking his time.