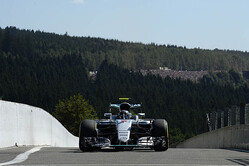 With temperatures remaining unusually high for qualifying at the Belgian Grand Prix, Mercedes driver Nico Rosberg claimed pole position, using the P Zero Red supersoft tyres. The most crucial sessions was Q2, with Rosberg, Red Bull's Daniel Ricciardo, and the Ferrari duo of Sebastian Vettel and Kimi Raikkonen scored their best session time on the soft tyre - which will mean that they will start the race tomorrow on that compound, which should allow a longer initial stint. With those soft tyres Rosberg already beat the 2015 pole time.

The weather will continue to be a talking point tomorrow: the forecast for tomorrow is for warm temperatures, but some rain could be possible at the race time. High temperatures would affect wear and degradation rates, adding a key thermal element to a circuit where wear and degradation is already quite high. As a result, both two and three stop strategies are anticipated tomorrow, with the rapid supersoft (on which most of the top 10 will start the race) expected only to complete a relatively short opening stint.

As qualifying got underway, track temperatures were in excess of 40 degrees centigrade. All the drivers came out on supersoft for Q1, with the exception of Mercedes driver Nico Rosberg, who was the only driver to choose soft. His team mate Lewis Hamilton, who has been affected by grid penalties, took a tactical approach to qualifying in order to maximise his opportunities in the race, completing only Q1 to ensure he was within 107% of the pole time.

During Q3 all the drivers run supersoft from start to finish. Rosberg took pole with a time of 1m46.744s, ahead of Red Bull's Max Verstappen, who claimed his best-ever qualifying result.

Paul Hembery: "The high track temperatures have increased the wear and degradation rates on a circuit that is already very demanding on tyres. We're expecting two or three pit stops per car, depending on degradation rates, and we've seen the tyre strategy start already with a number of drivers completing Q2 using the soft compound. With some drivers - notably Lewis Hamilton - starting out of position as well, due to grid penalties, we should see an intriguing mix of tactics during the grand prix tomorrow."