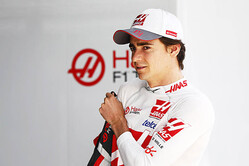 Esteban Gutierrez has been handed a 5-place grid penalty following an incident during this morning's final practice session.

The incident saw Pascal Wehrlein, who was on a flying lap, come up quickly on Gutierrez seemingly cruising through Raidillon, leaving the German no choice but to take to the grass.

Taking to the radio, the Manor driver described his Mexican rival as a "a f****** idiot" and called on his team to tell Charlie Whiting that the move warranted a penalty.

Sure enough, the stewards deemed that Gutierrez impeded Wehrlein in Turn 4, and due to the large speed differential between the cars and the position of car the Haas on the track, regarded this as dangerous.

Ruling that Gutierrez had breached Article 31.5 and was involved in an incident as defined by Article 31.6 of the Sporting Regulations, the stewards hit the Mexican with a drop of 5 grid positions and 3 penalty points, bringing his totla for the 12 month period to 7.