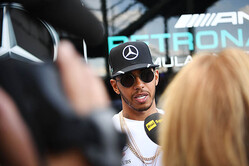 As expected, Mercedes opted to change the power unit on Lewis Hamilton's car ahead of this morning's sole free practice session.

This followed the two changes yesterday, when new turbocghargers and MGU-Hs meant a 30-placev grid drop.

"Straight into race sim work for Lewis with practice starts and cruise laps," tweeted Mercedes earlier as the Briton finally emerged from his garage. "No need for blistering times today. When you're starting from the back, it's all about race pace."

That said, in the final moments of the session, having struggled with his tyres, the world champion banged in a 1:48.635 which put him fifth on the timesheets, two places ahead of his teammte.

In view of the grid penalties, and with an eye on saving tyres, it is unlikely that Hamilton will do much running in qualifying this afternoon.