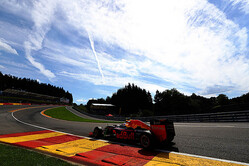 Not only did Nico Rosberg post the fastest time in this morning's session, he made a little bit of history in the process, for the German posted his 1:48.348 lap whilst sporting a Halo device, the German one of four drivers who tried the controversial safety device in the opening session.

Along the pitlane, more history was made as Esteban Ocon made his race weekend debut with Manor. And an impressive debut it was for the French youngster who not only out-paced his teammate, Pascal Wehrlein, but Daniil Kvyat, Jenson Button and the Renault pair.

Other than having Button 4.059s off the pace, McLaren's woes were further compounded by the fact that Fernando Alonso, though to have suffered a water leak, failed to post a time.

Indeed, between the sessions the team, on Honda's advice, changed Alonso's entire power unit meaning that his on his sixth edition of all possible components, thereby landing him with a 35-place grid penalty.

While Rosberg's time was set whilst running the Halo, the German was also on supersofts, as was teammate Lewis Hamilton when he posted his best time.

However, for the most part it was a real mix as far as tyres were concerned, especially ass Pirelli has given each driver two sets of unmarked tyres for evaluation.

Talking of Hamilton, having been given a new turbocharger and MGU-H, the Briton has already incurred a 15-place grid penalty, with talk of further component updates - and penalties - to follow. Indeed, the Briton's side of the garage was busy throughout the break.

McLaren wasn't the only team hurting this morning, both Haas drivers were clearly unhappy with their cars despite finishing tenth and eleventh, whilst Jolyon Palmer also had an issue that led to an early lunch.

The unusually high temperatures could mean problems for those teams, most notably Ferrari, who have gone aggressive in terms of their tyre choice - i.e. placing too much emphasis on the supersofts - and good news for those like force India who have been a little more conservative.

The lights go green and the Renault duos lead the way followed by Grosjean. They are soon joined by Wehrlein, Bottas, Massa, Alonso and Ocon.

Of the first wave, Bottas goes quickest (50.412), ahead of Magnussen, Ocon and Grosjean.

More problems for Grosjean who complains of "water temperature on". He is also unhappy about his lack of grip. Little by little, the Frenchman is taking over from Button as Captain No Grip. "The rear end is a disaster," he moans, "the front isn't any better."

A little silliness from Sainz and Vettel as the pair appear to think it's Sunday afternoon. Previously the German had gone wide at Les Combes after encountering a slow Force India. The German subsequently posts 51.084 to go fifth.

Just fifteen minutes into the session, Bottas is out of his car and loosening his overalls, not a good sign for the Finn or his team.

Going quickest in the first two sectors, Hamilton crosses the line at 49.782 to go quickest, eclipsing Raikkonen's best by 0.033s.

Palmer pulls off track at T9, his session seemingly over. "No power," the Briton tells his team.

The Virtual Safety Car is deployed... and just as quickly withdrawn.

Still sitting in his car, Palmer asks: "Is there no way we can fix it?" The team, under the relaxed radio rules, is talked through a reboot process and gets going again.

PBs in all three sectors, Wehrlein improves to 12th with a 51.130, albeit half-a-second off teammate Ocon's pace. That said, the Frenchman was on the supersofts and the German softs.

Indeed, following Ocon's example, Perez and Raikkonen are now on the red-banded rubber.

As Raikkonen goes quickest in S1, Ricciardo, on softs, goes quickest with a 49.133. As ever, the Finn is not strong in S2 and a poor S3 also means he fails to improve.

Verstappen is very unhappy after Raikkonen appears to get in his way. The youngster accuses the Finn of being dangerous.

Asked if he wants to do another lap, Raikkonen replies negative, admitting that he's already having trouble staying on the circuit.

"What is he doing, he's blocking me, it's dangerous," complains the Dutch youngster, "I'm arriving in the braking zone at over 300!"