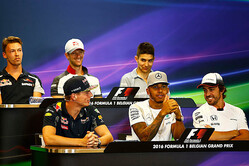 Esteban, if we could start with you: many congratulations on your grand prix debut. Just describe your emotions now: how excited are you and indeed how surprised are you to be racing this weekend?
Esteban Ocon: Yeah, thank you, first of all. No, it's a great opportunity for me to be driving here in Spa. So thanks to Mercedes, Renault and to Manor for that. It's great to start in Spa as well. It's a track I know, so it will help [me] to get up to speed. Let's see how it goes. I'm looking forward to it and I'm ready.

You're only 19 and as you say you've raced a lot here at Spa. You've also got quite a lot of Formula One now, you've done FP1 for Renault for the past three races, so do you feel ready and prepared?
EO: Yeah, I feel like I've had the best preparation I could get. It's been quite a long time since I'm around in the paddock and also driving Formula One cars, so it's great to finally make the step and I feel like I am ready to take that one.

And what are your goals for this weekend and the rest of the season?
EO: It would be good to score some points. That will be the target. I also need to learn the team, learn the way they work. Also to see how Pascal works and to get up to speed together, learning from him. Of course, he is a great driver and he has been quick all season so I will need to learn from him and get up to speed in qualifying.

Daniil, if we could come on to you please: it's been a very hard first half of the season following your return to Toro Rosso, and you've even been quoted as saying that you've fallen out of love with Formula One. What has the summer break done for your mind set?
Daniil Kvyat: I think it's done good things for me. It feels like it's all OK now for me - just come here, do my job, drive as I know how to drive, nothing special really. That's it.

What do you think you can achieve this weekend? You finished fourth at Spa last year and Toro Rosso introduced a lot of upgrades to the STR11 last time out in Germany, so what's a realistic goal this weekend?
DK: It's hard to predict the future, obviously. I don't know how to do it. So, we'll get out there, we'll drive, we'll use our potential as good as we can, and we'll see where we are. That's all I can do.

Romain, coming to you: great memories from here last year of course, you finished third for Lotus? However, it's been a bit of a dry old summer for yourself and Haas recently. Your last points finish was in Austria. What kind of reset does the team need in the second half of this season?
Romain Grosjean: Well, I think, yeah, the last few races before the summer break haven't been as good as we would have loved. We made some steps forward but there are a few things we needs to understand, so we're going to try different things. I think the whole summer break helped everyone to reset a bit the mind, to think more calmly about what we can do and what we have been doing and hopefully we'll get back in the car and it feels as good as it was initially in the year and from there we can score much more points. Generally, I still think that as a first year it's very positive and even though we have had some difficulties recently it's never far from the points. Eleventh often for Esteban, I had a bit more problems recently but hopefully goes away and we have a good race here.

How tight is the battle with your immediate rivals in the Constructors' Championship? Can you catch McLaren, stay ahead of Renault? Where's the focus?
RG: I think the focus is to learn and to do our best. I think we are more looking at catching McLaren than protecting from Renault. I think there are quite a long way behind and in terms of performance they are not any better than we are, so McLaren has done some good development recently but it doesn't mean we cannot go there and try to play with them.

Max, you have a Belgian mother, you were born just 50km from this race track and lots of fans are coming to see you this weekend, so do you view this as something of a home race?
Max Verstappen: Yeah, I think so. You know, even though I haven't driven here a lot, yeah definitely I think this is the closest I can get. I think there are also a lot of fans coming, so I'm definitely looking forward to that.

Red Bull overtook Ferrari in Germany, last time out, do you feel confident of stretching that advantage in the coming races?
MV: Well, we definitely will try to do that. I think the last few races have been very positive for us. We got the jump on them and now the most important thing is to stay ahead of course and try to close on Mercedes, even though I think that will be very hard, but we keep pushing, we keep developing and so far it has been very positive for us.

And do you think you have the necessary horsepower to do the business this weekend?
MV: We hope so. We'll see. I think first of all we have to get the car working really well in terms of set-up and then we'll see what happens.

Thank you. Fernando, Honda boss Yusuke Hasegawa recently described the team's progress as incredible. Do you agree with that assessment?
Fernando Alonso: Yeah, definitely I do agree. If you look at the team 12 months ago we were in a very different situation. We were starting last here using I think the ninth engine we put in Spa. We've been lapped two times here last year and in Germany and Hungary and definitely we make a step of nearly minutes, let's say, not even seconds in a race total time, so definitely we are in a much better position. We are enjoying and definitely the progress is very optimistic in terms of... I think even for next year as well. We are looking forward to this weekend. We have some updates also on the car. We know that Spa and Monza will be tricky races for us in terms of layout and characteristics of the circuits but definitely we are enjoying our time now, seeing all this progress and hungry for more.

You say you have upgrades for this race, but going forward where do you want the focus to be now for McLaren? Do you want it to remain on 2016 or would you like to see 100 per cent effort on 2017?
FA: Well, I think we want to be world champions, so this year is not any more possible.

Lewis, you've had an amazing summer, winner of the last four races, you come to Spa with a 19-point lead in the World Championship. Do you wish the summer break had never come - or did you need to recharge your batteries?
Lewis Hamilton: Well, firstly, good afternoon everybody, it's good to see everyone. Not too many tanned people - I was expecting to see people with better tans! I'm happy the break came. I think myself and the team needed it. Probably like the rest of the paddock. We had a month with four races in it so it's definitely been a positive thing for everyone, I think everyone feels refreshed coming back in.

Are you confident of maintaining the momentum from Germany - or could an engine penalty interfere with that here?
LH: Naturally we already discussed engine penalties before so that will come into play for sure - but I'll do everything I can to minimise the impact it will have. Yeah. Otherwise, beyond that penalty I'll eventually take, I think I'll be able to continue with the momentum. I plan to continue with the momentum that I had before the break.

Your next win will be your 50th. That's quite a milestone. What would that mean to you?
LH: I have to get there first! Still, today, everyday I have to pinch myself really to think that I've... what I've achieved so far in my career. It's a dream for all of us to be doing what we love, and to succeed at it... watching grands prix growing up I never thought I'd be sitting here with nearly 50 grand prix wins under my belt. It's very surreal - but I plan to win more. Hopefully we continue to.

(Dan Knutson - Speedsport & Auto Action) Max, you're an old hand now at Formula One, an experienced driver in Formula One. What advice would you give to the young man behind you, how to deal with this new world?
MV: Just jump in the car and go out and drive as fast as you can.

FA: At least to me. You are still young!

(Filip Cleeren - Motorsport.com) Max, there's obviously talk of Stoffel Vandoorne joining F1 next year. What would it mean for Belgian and Netherlands motorsport, and for yourself to have you two guys fight it out on the track together?
MV: I think it will be very positive for Belgian motorsport and definitely you will see even more Belgian flags here - they will have to compete with the Dutch flags - so we'll see what happens. I think if happens it will be great in general for Belgium.

(Kevin Eason - The Times) Can I ask you, can you win here even from 20 places back - and can I ask you a question that fans ask me: is it fair that a driver has to bear the burden of the penalty for the incompetence of his team?
LH: In terms of winning, that's the goal but it's going to be very, very hard if, obviously everyone's... if the gap is close between other cars. We're in the third year of evolution of these cars, so Red Bull have been very quick in some of the races, same with Ferrari particularly and down the whole grid, so it's going to be harder than it was last year or the year before to climb through the field, for sure - but I'll do everything I can. It's really about minimising the damage of taking the penalty. And I think... I mean it is a team sport. We win and we lose together as a team. Whether I make a mistake and the team take the penalty for it, or the team make a mistake, sometimes it's not actually mistake, it's just the kind of thing that happens. I don't look at it as incompetence, I find it a growing experience for us because we've learnt a lot from the issues that have happened and hopefully won't have them again. It's just unfortunate that I'm the - I guess - the test mice, or whatever you want to call it, that's tested all of these issues, because obviously none of the other Mercedes engines has had the problems I've had.