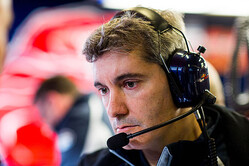 The 43-year old Catalan started at the Sauber headquarters in Hinwil after the summer break and will work in this capacity from the Singapore Grand Prix onwards, according to the team, in what will be clearly seen as the first positive move since Longbow Finance bought the Swiss outfit last month.

Pujolar, who began his racing career with Genikart preparing engines for its European and World Championship karts, joined Red Bull as Race Engineer in 2000 having spent time in Formula Nissan as well as the Red Bull Junior F3000 team.

Seven years at Grove as Data Engineer and Race Engineer saw the Spaniard then move to Hispania for one season before returning to Williams to engineer Pastor Maldonado for two seasons. In 2013 he was appointed Chief Engineer.

In 2014 he headed to Faenza where he first engineered for Jean-Eric Vergne and then Max Verstappen.

However, when the Dutch sensation was moved to Red Bull Pujolar didn't follow indeed, just one day later the Spaniard mysteriously quit the Faenza team, taking to Twitter to announce his decision.

"I did really enjoy and feel really proud of the work I did with Toro Rosso," he wrote, "now time to get ready for the next challenge! Grazie Faenza!"

Shortly after, Verstappen responded: "We did a great job together mate. You will come back stronger than ever!"

While the reason for Pujolar's sudden departure has never been explained, it is said there was an argument between the Spaniard and team principal Franz Tost over the Sochi weekend.

Now, as Sauber reorganises following its buy-out, Pujolar will be Head of Track Engineering, while Paul Russell, who is in the role of Chief Race Engineer on an interim basis, will return to his previous position as Head of Performance Integration.