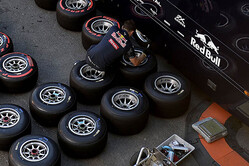 Pirelli has revealed that the teams will run unmarked prototype tyres in both of Friday's practice sessions for the Belgian Grand Prix.

"In FP1 and FP2 we will test prototype unmarked tyres modified to even further protect the tyre from possible consequences generated by accidental multiple impacts on kerbs or other external bodies," said the manufacturer today.

Interestingly, despite changes to some sections of kerbing at a number of previous tracks, there are no such changes at Spa-Francorchamps for this year's race.

It's understood that two sets of tyres will be available for each driver for evaluation on Friday.