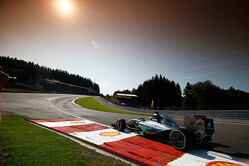 According to UBIMET, the official meteorological service provider to the FIA, there will be fine and sunny conditions across the week at Spa-Francorchamps, albeit with the risk of a shower on Sunday afternoon.

Fine, sunny and stable weather conditions are expected through the week as an extensive high-pressure system covers Belgium.

However, the influence of an approaching Atlantic low will see the risk of rainfall increase toward the latter half of the weekend. Despite this, conditions remain exceptionally good for August, a month where Spa averages fifteen days of rainfall.

From Wednesday to Friday mostly fine conditions are forecast with daily maximum temperatures of 29 to 31 degrees. Moderate winds from a generally southerly direction.

On Saturday, partly cloudy conditions are forecast with a maximum of 30 degrees. Winds light and variable with dry conditions likely to remain for the qualifying races.

Sunday will also see dry and partly cloudy conditions at first with a 30-40% chance of a shower in the afternoon. With a wind shift to the southwest, temperatures will slightly lower with a maximum temperature of 28 degrees.

No doubt most fans will be hoping that UBIMET is wrong and that the chance of rain increases to 70-80%.