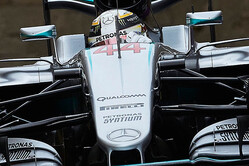 Shortly after this morning's session got underway, Nico Rosberg taking to the track sporting a Halo device, Mercedes took to social media.

"Fresh power units this morning for both Hamilton and Rosberg," the German team tweeted. "For Hamilton, this comprises ICE 4, MGU-K 4, MGU-H 6 and TC 6. This incurs a 15 place grid penalty. For Rosberg it is his 4th of all those items."

However, the Briton's plight is further compromised by the fact that the team intends introducing an engine update, possibly at Suzuka, which would require further components and thereby further penalties with only a few tracks remaining where, like Spa, the world champion could be reasonably expected to make up a decent number of places.

Indeed, in light of the nature of some of the upcoming tracks it is believed Hamilton might yet take on a seventh turbocharger and MGU-H this weekend to add to his pool, the feeling being that starting from the back of the grid here is pretty much the same as starting 15th.

Having left it so late confirming this first component change, it is believed the Brackley-based outfit could adopt a similar for FP2 and possibly even FP3.