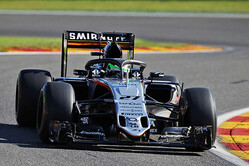 Even though there is no official date for its introduction, Nico Rosberg staked his claim to a little bit of F1 history today when he posted the fastest time in FP1 while his Mercedes was sporting the controversial Halo device.

The German was one of four drivers to test the device, and while Daniel Ricciardo removed it after just one installation lap, Rosberg persevered with it, going on to post the fastest time of the morning.

"It was good to try it," he told reporters, "they've done a great job with it because it doesn't disturb me at all when I'm driving, it just increases the safety a lot.

"I know it's not nice visually," he admitted, "looking from outside it doesn't make the cars prettier. But it's such a big step in safety and I think it's a good thing."

Asked if he encountered any issues with visibility, the German said he was entirely happy, even through the switchback that is Eau rouge.

"No problem," he said. "It is easy. You don't even notice the top part. I think they can come down with that, because LMP1 is lower anyway. For sure we can see. No problem."

"It was a weird feeling," admitted Nico Hulkenberg, who also ran with the device, "and to have something there which limits you was obviously a new experience. I have to say visibility wasn't too bad, I don't think it was an issue.

"It will take time to get used to," he added. "I only did an installation lap, that's nowhere near enough to properly understand. We need more time and more testing to get a better picture."

"My biggest concern was visibility," said Carlos Sainz. "But visibility is not a problem.

"Through Eau Rouge, you don't have to go like this," he added, ducking his head to demonstrate, "to see where the corner goes. Obviously you have this thing in the middle which disturbs you a bit but at the end of the lap you don't even notice it's there anymore. The eyes get used to it, they get used to looking across it. That's why we have two eyes!

"The biggest concern and margin for improvement is getting in and out of the car is quite tricky at the moment," admitted the Spaniard. "I defend the halo a lot, I am a big supporter of it because it can save lives, but if there is something to be improved we need to say it. At the moment extraction is not easy."