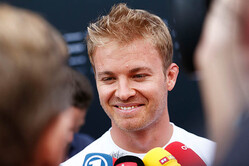 Ahead of today's qualifying session the air temperature is 31 degrees C, whilst the track temperatures is 41 degrees.

Having set the pace in FP2 yesterday, it was back down to earth for Max Verstappen this morning as the youngster was sidelined by a suspected electrical issue which meant he didn't post a time.

While the question mark of a component change, and subsequent penalty, hangs over the youngster, the fact that his crew have been working frantically through the break doesn't help raise the spirit. All of which is bad news for the thousands and thousands of Dutch and Belgian fans that have come to support him.

Along the pitlane the Mercedes crew have been working just as hard on Lewis Hamilton's car, the Briton having already incurred a 55-place grid drop due to the various engine and component changes.

Indeed, following this morning's session, the only driver who appears relatively calm is pace-setter Kimi Raikkonen, the Iceman. Then again, this is his favourite track and he has enjoyed much success here.

The high temperatures, very unusual for Spa, have created their own problem, for team that have gone aggressive on tyre choice are now regretting the move, some driver complaining that the supersofts don't last a lap. There is also unease at the high tyre pressures recommended by Pirelli.

Until this morning's problems it was looking good for Red Bull but now Ferrari is looking better, then again the Italian team has placed a lot of faith in the supersoft.

Ignoring Hamilton - who should be the man to watch tomorrow - Nico Rosberg hasn't really shown his hand yet. Leaving it until the last minutes to put on the supersofts the German could only manage seventh this morning.

Having disappointed yesterday, Williams looked stronger this morning, both driver in the top eight, whilst Force India has to be the favourite for pulling off a major surprise this weekend.

Doomed to start at the very back, alongside former teammate Fernando Alonso, who incurred a similarly massive grid penalty following an engine change, Hamilton is unlikely to play much of a part this afternoon, preferring to save his car and tyres for tomorrow.

As ever, the FIA is cracking down on track limits, and a sensor at Raidillon, which has already caught out a number of drivers, looks set to play a significant role this afternoon and tomorrow.

Talking of the FIA, Esteban Gutierrez has been handed a 5-place penalty following a serious incident this morning which saw Pascal Wehrlein forced off track just after Eau Rouge.

The lights go green and the Haas duo leads the way, followed by Wehrlein.

Ocon, participating in his first F1 qualifying session, is another early riser.

Ocon is on the medium rubber, while most others are already on supersofts. Rosberg is on soft.

As Nasr splits the Haas', a cheer goes up around the track as Verstappen heads down the pitlane. He's on supersofts.

Nasr's time is deleted after the Brazilian exceeded the track limits at T4 (Raidillon).

As Magnussen runs wide at T4, Verstappen is warned of Nasr's punishment.

Raikkonen goes quickest with a 47.912 only to be leapfrogged by his Ferrari teammate (47.802) moments later.

Sure enough, Magnussen's time is deleted, a warning to all.

Bad news for Alonso, the Spaniard has pulled off track just after Eau Rouge. His car is pushed to safety. Then again, the McLaren driver was going to start from the back of the grid anyway.

Ricciardo goes seventh with a 48.407, exactly the same time as his teammate, as Ron Dennis watches Alonso climb from his stricken car.

While most have settled for their times, as Magnussen and Nasr head out to post legal times, they are followed by the Haas duo, Wehrlein, Massa, Button and quite a few others.

His job done, Hamilton climbs from his car.

Of the ten cars on track, Sainz is the last to cross the line before the chequered flag. It's do or die.

The timing sheet goes crazy as some driers improve and others are demoted.

As Massa goes quickest of all (47.378), Nasr is demoted into the drop zone, whilst Sainz makes it through by the skin of his teeth, unlike his hapless teammate.