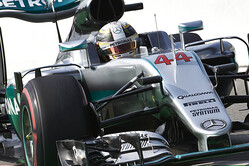 Ahead of today's sole free practice session, the air temperature is 27 degrees C, whilst the track temperature is 30 degrees. It is bright and sunny.

As ever, Mercedes dominated yesterday, Nico Rosberg quickest in the morning and teammate Lewis Hamilton setting the pace in the afternoon.

Ferrari, sporting the latest engine upgrade that has used up the last of its tokens, was third and fourth in both sessions, albeit over half-a-second off the pace.

Despite the fact that this isn't a Red Bull friendly circuit, and the lack of grunt from the Renault (Tag Heuer) engine is left fully exposed, the Austrian team was fifth and sixth.

As ever, the midfield looks set to be a real minefield with a number of teams seemingly very evenly matched.

The fact that, once again, Pirelli had provided its prototype tyres, made it difficult to get a true picture, but this should change today as the teams stick to the regular sets.

"We thought that Belgium was hot, but the track temperatures we saw today were even hotter," admitted Paul Hembery, "peaking at 46 degrees centigrade.

"This will have an effect on tyres," he admitted, "but we have to see what conditions are like for the remainder of the weekend. Traditionally, a one-stopper has been the winning strategy, but this year we're introducing the supersoft for the first time. How that tyre - which is about half a second faster than the soft so far - could perform in the race as part of the overall strategy was a big focus of the work in free practice today."

As if having the tifosi and the Italian media, on its back wasn't enough, Ferrari has the added pressure of having company president Sergio Marchionne in attendance. And yes, he is wearing that pullover.

Ocon is first out, the Frenchman straight on to the supersoft.

As Ocon heads back to the pits after an installation lap, Button, Alonso and Ricciardo head out, the Australian told not to push his tyres too hard.

Gutierrez posts the first time of the day (24.721), the Mexican on the supersoft. Indeed, of the 10 drivers on track all bar Ricciardo and Hulkenberg are on the red-banded tyres, the Australian and German on mediums.

Just to be different, Nasr heads out on softs.

Grosjean leapfrogs his teammate with a 24.463 as Massa goes third ahead of Wehrlein.

On the mediums Hulkenberg goes fifth, around 1.6s off the pace.

Grosjean goes off into the gravel at Ascari and is well and truly beached, thereby getting the VSC deployed. Replay suggests he simply carried too much speed into the notorious chicane.

However, the Frenchman claims it was a gearbox issue, claiming he "lost it" just before the incident.

As the VSC is withdrawn Rosberg heads down the pitlane followed by his teammate, both are on softs.

Ricciardo goes quickest (23.709) on the supers, but teammate Verstappen is only 0.293s slower on the softs.

No sooner has Raikkonen split the Red Bull duo than Hamilton bangs in a 22.856 to take the top spot. Meanwhile, Rosberg has to abort his flying lap when (guess who) Verstappen, on his slow down lap, gets in his way. The German aborts his lap.

On his second flying lap Rosberg posts 23.333 to go second. "What on earth was that!?" he asks his team, referring to the Verstappen incident. Meanwhile, replay shows the Red Bull driver wave an apology... at least we think it's an apology.

Vettel goes fourth with a 23.547, ahead of Ricciardo, Bottas, Verstappen, Gutierrez, Grosjean and Massa.

As Kvyat gives an amazing amount of feedback, confirming that the car is "much better" today, Vettel improves to second with a 23.312. However, he remains 0.456sd off Hamilton's pace and is on the supers whereas both Mercedes drivers are on the softs.

After 28 minutes, Ocon and Nasr have yet to post times.

Ocon finally posts a time, the Frenchman stopping the clock at 25.272 to go 16th.

A 23.740 sees Verstappen, no on the supersofts, leapfrog Bottas to go sixth, thereby establishing the basic order we witnessed yesterday.

Verstappen has to run very wide at Ascari in an attempt to avoid a very slow Magnussen.

Asked for his thoughts on his car's balance, Wehrlein's response is brief but to the point. "I don't like it," he says. Brevity worthy of The Iceman.

Now on the supersofts, Rosberg is quickest in all three sectors to go quickest with a 22.401. However, Hamilton is right behind and even quicker, finally crossing the line at 22.008 despite a minor mistake at Ascari.