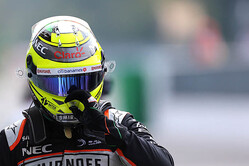 Sergio Perez has revealed that a decision on his plans for 2017 has been further delayed.

However, Sergio Perez, though keen to remain with the Silverstone-based outfit, has continually denied this, insisting that the final decision rests with his sponsors.

Speaking in Singapore, despite further assurances from Force India that the deal is done, the Mexican admitted that a decision has been further delayed.

"I was hoping to be able to be in a position to announce my plans for this weekend," he told reporters. "We have some delays but I really hope before the next race we can definitely announce where I will be racing."

The Mexican (and his backers) are understood to be on the 'want list' of a number of teams, most notably Renault and Williams, however, Perez is known to be keen to see what happens at Ferrari come 2018.

With Force India currently looking a better bet than either Renault or Williams, Perez admitted that he might be best served staying put.

"I always say I will be very happy if I can stay where I am," he said.