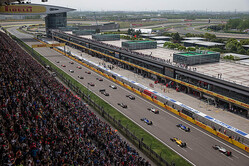 A week after Liberty Media began the process of buying Formula One, the sport's new chairman Chase Carey will be in Singapore for this weekend's Grand Prix, accompanied by Bernie Ecclestone who had initially planned to remain in the UK to help oversee the deal.

As the 'new boss' prepares for his first race in charge, the drivers were asked what changes they would most like to see under the sport's new ownership.

"I would love to see the competition a lot closer, across the team" admitted Sergio Perez, "giving the midfield teams the opportunity to be capable of winning races, fighting for the title.

"I think it would be great for the fans to see one race Williams on top, another race another team, that would be very good," he added.

"But for that you need to change how you divide the money," he continued, echoing the continuing cry of his team. "That would be a very good thing for the sport."

"I agree with Valtteri," said Felipe Nasr, "I think the most important thing is to see how close the competition is between the cars, that what I hear from the fans. They want to see more fighting on track, between cars, between teams.

"The main thing is closer competition," agreed Jolyon Palmer. "At the moment we turn up for a weekend and we know that it's a maximum of two, four, six drivers who can win the race. It would be nice to turn up here and think maybe a Williams could win, or Force India, or someone pull a big surprise.

"That's the biggest thing that would change fan involvement," he added, "and make it more interesting to watch.

"I agree," added Marcus Ericsson. "Closer competition throughout the grid and more teams scoring wins and podiums. That would be the biggest thing in attracting the fans."

"Nothing springs to mind," said Daniel Ricciardo, "nothing we haven't heard before.

Then, following a short pause, he added: "Saturday races? Racing on a Saturday as opposed to Sunday... so you can plan a bigger night. That would be good fun."