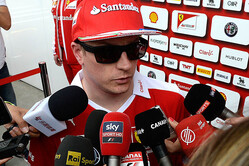 Though much was said in the heat of the moment, and essentially ever since, one of the most shocking things to come out of last weekend's Belgian Grand Prix - other than Sebastian Vettel's admission that he was responsible for the first corner incident - is that Max Verstappen's subsequent actions were effectively 'pay back'.

"If Turn One hadn't happened, I wouldn't have been so aggressive and pushed Raikkonen out like that," he admitted. "He had to lift a bit, but the stewards thought it was fine so it's all good."

Other than what Sergio Perez might have done to the youngster to warrant his own little nudge during the race, Verstappen's admission raises a worrying prospect, one that Raikkonen admitted to this afternoon.

Whilst refusing to go along with the media's obvious intent to stir things up by calling for the FIA to take action, the Finn did express concern at Verstappen's admission that if it hadn't been for the first corner incident he wouldn't have been so aggressive.

"Personally I have nothing against Max, he is doing a good job, he is fast," said the Finn. "But there are certain things in my feeling that are not correct if you have to slow down or brake at full speed, but obviously those things are never-ending discussions.

"Like I said, I have nothing personal against him but certain things are not correct," he continued. "If somebody says that during the race he does something because of what happened at first corner, that it is pay back, I don't think it is the correct sport to be purposefully paying back. It can end up in a very bad way.

"Yes, people make mistakes, everybody has made it and it will happen to all of us," he added. "You just have to accept it. But this is not the place to start acting silly in a way and paying back something."