Verstappen: Ferrari duo should be "ashamed" 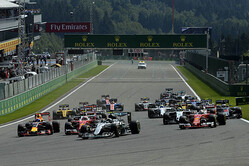 Rather than reporting a glorious victory, the Dutch media is today having to report the fact that despite his best efforts Max Verstappen left Spa-Francorchamps without a single point, despite starting from the front row for the first time ever in his F1 career.

Ahead of the Italian Grand Prix, where the media is likely to be a little more understanding of Messrs Vettel and Raikkonen, thereby whipping the tifosi into a frenzy, Verstappen has told the Dutch media that the Maranello duo should be ashamed of their actions yesterday.

"I think they should be ashamed to cause a crash like that with their amount of experience and then complain about me," said the Red Bull driver.

"They don't have to make a drama about what happened afterwards," he continued. "They have to understand I'm not happy with them screwing up my entire race.

"There was room for three cars," he said of the first corner clash that effectively ended all three drivers' hopes. "When I got alongside Kimi, he started squeezing me. If Vettel hadn't turned in and left one more metre of room, we would have all gotten through.

"On the video you can clearly see when Vettel turns in, he drives into Raikkonen. And then Kimi's car bumps into mine."

The youngster then admits to being overly aggressive later in the race, admitting the incident at La Source had left him angry and frustrated.

"If Turn 1 hadn't happened, I wouldn't have been so aggressive and pushed Raikkonen out like that," he admitted. "He had to lift a bit, but the stewards thought it was fine so it's all good.

"It's like I'm a red rag to a bull for him at the moment. We always seem to get in each other's way."