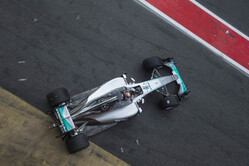 Following overnight rain, the final day of the 2017 tyre test with Mercedes at Barcelona got underway on a damp surface, with track temperatures of just 15 degrees centigrade, and fog. The rain returned in the afternoon, ending the session prematurely.

Despite this, it was possible to complete some laps with Pascal Wehrlein, deputising for Lewis Hamilton who has "foot discomfort", at the wheel in the morning.

The young German, who has been the most prolific tester of Pirelli tyres this year, completed 31 laps using the intermediate compounds in the new wider 2017 sizes.

Added to the 60 laps driven by Nico Rosberg yesterday, this makes a total of 91 laps completed over two days, using a 2015 Mercedes modified to simulate 2017 levels of downforce.

"Obviously the weather hindered progress to some extent both today and yesterday, as is not entirely unexpected at this time of year in Europe," said Paul Hembery. "The same can apply to the early part of next year, which is why we are in favour of some guaranteed warm weather testing in 2017, before the season gets underway."

The next Pirelli test gets underway in Abu Dhabi tomorrow with Red Bull.

Following this week's Abu Dhabi test, Red Bull is in action at the Yas Marina on November 2nd and 3rd, while Ferrari has a three-day test scheduled from November 14th.