Motorsport has something of a chequered past when it comes to connections with football. There have been some hits, some misses and some own goals.

Long-time readers will remember the Premier Formula plans for a new single-seater series supported by football clubs. It never made it off the drawing board but a similarly strange idea did. It was known as Superleague Formula and it launched in 2008 with the gimmick of football clubs sponsoring the teams. It attracted some big name clubs like A.C. Milan, Galatasaray and Tottenham but the drivers were less well-known with Australian sports car driver John Martin winning the championship in 2011, the final year of the series.

In contrast, the takeover of Queens Park Rangers by F1 boss Bernie Ecclestone and his business partner Flavio Briatore went straight in the back of the net. They bought the Football League team for a song in 2007 and not only did they manage to get investment from fellow billionaire, steel baron Laksmi Mittal, they took it to the Premier League in 2011 and sold it the following year to Caterham boss Tony Fernandes.

More recently, Sauber had a deal with Chelsea which was more of a joint-promotion partnership than a typical team sponsorship.

The latest F1 name to try his hand at the beautiful game is Anthony Hamilton, father of three-time champion Lewis. He is doing things differently to his predecessors to say the least.

Hamilton is best-known for having steered his son to championship success but he also happens to be an accomplished inventor. Some fans will know this from his development of an on-board LED display showing spectators the position of cars in a race which was tested by Force India at Yas Marina in 2014. His latest creation is perhaps the most innovative of them all.

Pitpass wouldn't normally devote column inches to such things but this development is so inventive that it says a lot about the man who has driven the success of F1's most well-known driver. It shows he is always looking for solution to problems and, in this case, it was that age-old problem of how to stop things getting smashed when kids play indoors.

"I was at a friend's house one day and she has three young boys who all love football. They haven't got a very big front room but the boys were knocking a football about and knocking the furniture about with it," he says. "The ball was going everywhere and was breaking things as they were trying to do keepy-uppies. It gave me the idea of coming up with something to help them train and improve their ball control skills without fear of breaking anything. Something which would train them to be calm, confident, focused and dedicated."

His solution consists of a ball tethered to a central console which keeps track of the number of times the player has kicked it upwards on the top of their foot. The tether has enough slack to give the ball freedom of movement whilst preventing it from doing damage to its surroundings. Crucially, it is small enough to fit in the corner of a room so children can train at any time.

It has the snappy name of KickTrix and unlike the usual celebrity-endorsed products, which have little input from their namesakes, Hamilton designed this from the ground-up.

As the ball is directly connected to the central console each KickTrix unit can display a performance log for players, parents and coaches to track progress. An app records data and allows players to compete against each another remotely.

"It's so important that youngsters do some form of exercise and in a culture where so many sit for hours in front of their computers, I wanted to create a fun training system that would get kids active but still allow them to interact with their friends via the phone apps," says Hamilton.

He adds that "in the UK it gets dark early so sometimes kids don't get a chance to go out and play football in the park after school. Kids can come home and do 15 minutes on the KickTrix machine before they do their homework. By the end of three months they'll be fitter, more skilful and be able to confidently display keepy-uppy skills they never thought they could master. 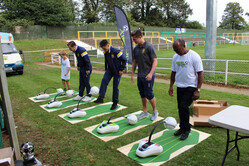 "Kicktrix is all about controlling the ball on a sixpence. That's exactly what we used to do with Lewis - braking on a sixpence. He had to brake in the same spot every time. And once you can control that, you're in control of yourself, your sport, and the direction in which you're actually planning to go."

Hamilton adds that KickTrix isn't a sports programme in itself but allows children to continue their training at home and can also be built into physical therapy programmes, especially for anyone with leg injuries, as the repeated movement helps to build up ligament, tendon and muscle strength.

In an era where increasing numbers of people are living in cities KickTrix could also boost urban youth health levels. Its greatest potential is perhaps in Asia where the population is clustered in cities, green space is at a premium and football is hugely popular. Hamilton is aiming KickTrix squarely at this market and to appeal to the gaming generation players will be able to compete in online championships via the app.

It has a chance to make a big dent in the market but Hamilton is starting with more modest goals and says "if it helps just one individual become a world class football player I'll be a very happy man." With his track record Hamilton could soon find head-hunters from the Football Association lining up on his doorstep.