A reprimand for Vettel 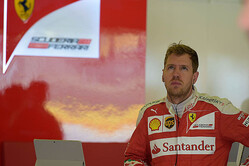 Sebastian Vettel has been handed his first reprimand of 2016 after he ignored the bollard at the pit entrance in today's second practice session.

According to the Austin stewards, Vettel did not stay to the left of the bollard at the pit entry, as required in the race director’s event notes, a breach of Article 12.1.1.i of the Sporting Code.

In mitigation, the German argued that a McLaren was in his way when he turned in to the pitlane and he opted to drive around the bollard.

The German, who enjoyed a "tough day", finished fourth on the timesheets, 0.8s down on pacesetter Nico Rosberg.

"This morning we had some problems with a little wing that failed and came off, so we lost some track time, which was a bit "costly" for the afternoon because we couldn't re-balance the car.

"We are a bit on the back foot today and I am not entirely happy with the car balance yet; it is a little bit too nervous, but I think for tomorrow we can improve.

"It's Friday and I wouldn't worry too much," he concluded. "You never know what the others are doing, we knew about ourselves, but we didn't have the best day. For sure it will be very close with them and it will be difficult to match them tomorrow with the speed that they showed today, but I think the Ferrari you saw today is not the Ferrari you will see tomorrow."