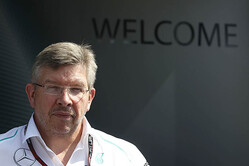 Having revealed that it was distrust of Toto Wolff and Niki Lauda that drove him out of Mercedes, Ross Brawn has admitted that it is his dislike of the politics that dominate the sport that have prevented his return.

Almost since the day the Briton swapped his overalls, team shirt and drawing board for a fishing rod, Ross Brawn has been linked with a possible return to the sport. Indeed, having seen the sport from the inside with title winners Benetton and Ferrari many consider him the ideal man to help shape the technical side of the sport as it moves forward.

However, in his book, Total Competition, co-written with Adam Parr, Brawn admits that whilst a technical role might well attract him back to the paddock, it is the politics that dominate the sport that turn him off and keep him away.

"I've been invited to become involved in Formula 1 again and help perhaps shape the regulations or help shape the future of Formula 1," he reveals. "And that invitation is to get involved in the politics of Formula 1, because that is what it's all about.

"If someone said, 'do you want to come back and do a bit of engineering?' I could be tempted," he admits. "But to have to deal with all the politics of Formula 1, that was probably the side I enjoyed least of what I did. And therefore the side that is least attractive to me. It is probably the arena I am least comfortable with in Formula 1."

It is the politics and short-sighted nature of those that rule the sport that frustrate most of us, and Brawn shares our frustration admitting that the powers-that-be focus on quick fixes as opposed to long terms solutions.

"Where Formula 1 has struggled is in the short-term thinking," he writes. "I was approached by someone from within the sport to give some views on where Formula 1 might go. I set out my thoughts and I gave my views and they said, 'Yes but that's three years away. We need a solution now'. I said 'There isn't a solution now. The inertia of Formula 1 is such that you will be sat here in three years' time and not having moved forward. 'You want a short-term answer to something that doesn't have a short-term answer. But three years will be upon you before you know it.' That was two years ago."

As an example, Brawn points to the new (for 2014) engine formula, introduced the year after he left Mercedes.

"It's interesting to have engines as part of the technical challenge, given that we haven't had it for so long," he writes. "But the genie was let out of the lamp with insufficient constraints, particularly financial, and it's gone berserk.

"Now I gather there is going to be no constraints on engine development, so goodness knows where that is all going to end up."