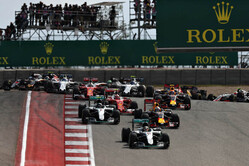 It's understood that as many as 70,000 fans attended last night's concert featuring Taylor Swift at the circuit, the American songstress' only live gig of 2016.

One only has to check the picture galleries to see that there was nowhere near that many fans in the numerous stands around the circuit for the on-track action. Therefore one has to wonder if the United States can really support several races as new owners Liberty Media are pushing for.

Of course, some home grown talent would help, but according to Red Bull and Haas there isn't any, though - should he get the gig - Lance Stroll should attract some fans from over the border.

Sadly, based on the evidence thus far this weekend, Haas isn't looking likely to get the home fans celebrating, the US team enjoying the sort of home jinx that Honda suffered in Japan.

With a 33 point deficit to his teammate, Lewis Hamilton really is on the back foot for once. Indeed, Nico Rosberg can actually afford not to win today, the pressure being squarely on the Briton's shoulders.

That said, we've seen a new Nico of late and the latest version is not the sort to want to win a title by deem of another's issues or merely taking the points for second and third etc. So we can probably expect to see a decent battle between the pair today, we certainly hope so.

That's assuming, of course, that firstly Hamilton gets off the line with no problems and that if he does the pair don't tangle in that infamous first corner.

It's understood that in recent days the Briton, a three-time winner here, spent hours practicing his starts in the team simulator, though it's unclear if water was thrown at the device to replicate conditions on his side of the track in Japan.

To further complicate matters for the defending champion, it is unclear whether there are any lingering after effects following his fuel system change, a move which had his crew working throughout Friday night and of which Hamilton was blissfully unaware.

Despite the new crackdown on moving under braking in order to defend one's position, we can expect Max Verstappen's tactics to be as robust as ever, be it holding off a Ferrari, Mercedes or his own teammate. At the same time, on the attack we expect the Dutch driver to be as aggressive as ever.

In a move which will add some spice, particularly as the race develops, the two Red Bull drivers are on a different tyre strategy. Verstappen, like those around him, will start on the softs, while Ricciardo starts on the supers.

The move to split strategies was with the full agreement of the drivers and was adopted, in part, to put Mercedes in a difficult position, the German team, like Ferrari, having been forced to changed tactics by Red Bull's use of a similar strategy earlier this season.

That said, the supersofts are only likely to be good for around 10 or so laps. Bottas and Vettel did more in practice but conditions were cooler then and not on full fuel.

On the other hand the Mercedes duo can both expect to last for 20 plus laps on their softs but will they be drawn into the Ricciardo trap.

At Ferrari it's going to be another day of damage limitation, picking up whatever the team can. A win totally out of the question, the Maranello team can only really rely on the errors of others or poor reliability if it is to even secure a podium place.

Behind the two leading teams, and ahead of the pair fighting for fourth, the legendary outfit is in a proverbial no man's land and looks likely to remain there for some time.

Said fight for fourth between Force India and Williams is likely to be as fun as ever. Hulkenberg did well to finish ahead of the two Grove cars in qualifying, while it has now been revealed that Perez suffered a "technical issue" during qualifying "which cost him performance. The team claims the issue has now been resolved and the Mexican will be up for the fight.

Behind them we have McLaren and Toro Rosso, where Daniil Kvyat will probably want to signal the team that it made the right move in retaining him. Starting from twelfth, Fernando Alonso could be in for some points while Jenson Button was left extremely frustrated following a Q1 which saw him sent out late and in traffic, a 'misunderstanding' with Palmer not helping his demeanour, or that of the Renault driver as it happens.

While Renault, Sauber and Manor will be keen to get this afternoon, and the next three race afternoons, out of the way and hope that things get better in 2017, Haas will be determined to come away with something more to celebrate that Romain Grosjean's 100th Grand Prix. And who can blame them?

Historically, we know that this is not a race where pole position is vital for victory, with the right strategy, anything is possible. Two or three stops is expected depending on the tyre choice at the start, but somebody could decide to try something different.

On the grid, Sebastian Vettel gets a hug from Maurizio Arrivabene.

The field heads off on the warm-up lap, all are on softs bar Ricciardo, Raikkonen, Vettel, Hulkenberg, Bottas, Massa, Sainz, Perez, Grosjean and Button, while Nasr and Ocon are on mediums.

They're away. Hamilton gets away perfectly, with Rosberg slipping in behind to cover the Red Bull duo. As they head up the hill to T1 Ricciardo moves to the inside of Rosberg as Raikkonen is level with Verstappen.

Ricciardo gets ahead of Rosberg coming out of T1 and the German, who runs slightly wide, is unable to carry any momentum into T2 and fight back as Raikkonen also got the drop on Verstappen.

Further back a couple of cars have run wide and a piece of debris skates across the run-off.

"I've got big damage at the front" says Hulkenberg who clashed with the rear of Bottas in T1, whilst further round the lap Force India teammate Perez, who did well to avoid that T1 melee, has spun following a brush with Kvyat.

In a bid to avoid the Hulkenberg incident both McLarens took full advantage of the run-off.

Bottas has a puncture and is down in 11th, he and Hulkenberg both pit at the end of the first lap, though the German's race seemingly over.