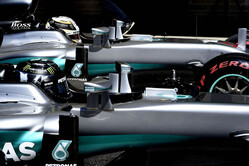 Lewis Hamilton has claimed pole position for Mercedes at the Circuit of the Americas, setting a time of 1m34.999s using the P Zero Red supersoft tyre. This comprehensively beats the fastest ever lap seen at the track previously: 1m35.657s, set by Sebastian Vettel in 2012.

Track temperatures were significantly warmer for qualifying in the afternoon - at 27 degrees ambient and 39 degrees on track - than for FP3 in the morning, where the Red Bulls went fastest.

The initial Q1 session was completed with all the drivers scoring their best time on the supersoft, which is theoretically around a second faster than the soft. The frontrunners all got through this session using just one set.

In Q2, the Mercedes drivers were straight out on the soft tyres, as was Red Bull's Max Verstappen. Red Bull opted to split strategies, with Daniel Ricciardo on supersoft going fastest in Q2. All the remaining drivers used supersoft as well, meaning that three drivers out of the top four will start on the soft tomorrow and can potentially do a longer first stint. However, they will be surrounded by drivers starting on the faster supersoft - with a notoriously tricky first corner to deal with as well.

The frontrunners did two runs on supersoft for the final Q3 shoot-out, with Hamilton clinching his first pole in Austin by 0.2 seconds from his team mate on the second run.

The strategy options are quite open for the Circuit of the Americas, also because this is a circuit where overtaking is by no means an impossible task. Historically, this is not a race where pole position is vital for race victory - meaning that with the right strategy, anything is possible. Two or three stops expectable, depending on the tyre choice at the start. But somebody could decide to try something different.

Paul Hembery: "We had perfect conditions for qualifying, in which we saw the race tactics begin already. With both Mercedes starting on the soft tyre, plus Red Bull's Max Verstappen, there's a fundamental strategic variation that is likely to hold the key to the race tomorrow. Once again track temperatures were considerably higher this afternoon than the morning, and we'd expect similar conditions for the race tomorrow. We've seen in the past that strategy can help boost starting positions, so we can expect an eventful race tomorrow."

Medium: Not used at all during qualifying but looks like an interesting option for the race.

Soft: This was essential to the qualifying strategy today, with three drivers using it in Q2.

Supersoft: The most popular choice in quali, but affected by quite high degradation.