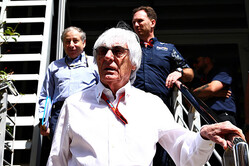 With a little help from Bernie Ecclestone, the teams have agreed on a pre-season testing programme.

After weeks of wrangling it took less than an hour for F1 supremo Bernie Ecclestone to settle the sport's latest row.

Due to a number of factors, not least the uncertainty of the weather, Pirelli wanted next year's pre-season tests to take place in Bahrain.

Rather than the possibility of rain in Spain, the Italian manufacturer wanted the all-important maiden tests of its new wider tyres to take place in conditions akin to those found at the opening races.

When the idea of testing in the Middle East was first mooted, a number of teams immediately agreed however, a number of others were totally against the idea.

Pointing to the question of costs, not to mention logistics, Red Bull and Williams led the dissenters, while Mercedes and Ferrari were all for the trip to the desert.

However, regulations state that for a test to take place outside Europe the agreement off teams must be given… always a difficult prospect in F1.

Despite the claims of Liberty Media bosses that the sport doesn't need a dictator, between today's two practice sessions in Austin, Bernie Ecclestone got the eleven team bosses together and thrashed out a deal which will see both pre-season tests held in Barcelona, while the in-season test scheduled to take place at the Circuit de Catalunya will now take place in Manama following the Bahrain Grand Prix.

While the decision is a major blow to Pirelli and those teams that supported the Bahrain test, the speed with which Ecclestone settled the dispute, which has rumbled on for months, sends a clear message to F1's new owners.