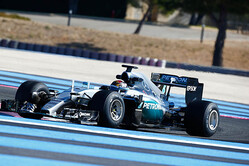 Though appreciative of the costs of testing in Bahrain, Haas team boss fears consequences if Pirelli is ignored.

Not for the first (or last) time, the teams are divided.

While some, including Mercedes and Ferrari, agree with Pirelli in that pre-season testing should take place in the middle-east in order to best prepare for the opening rounds of the 2017 season and the high downforce expected under the new rules, others, including Red Bull and Williams, are totally against the idea.

Other than the extra cost of testing in Bahrain, Red Bull argues that the distance between such a test and its Milton Keynes HQ presents a logistical nightmare especially at what is always a highly challenging time for teams.

While Horner has suggested that costs could be alleviated by Pirelli picking up the tab, this wouldn't solve the logistical issues, and as the debate rumbles on, and the test dates draw ever closer, Haas team boss Guenther Steiner warns of another scenario should the teams not follow Pirelli's advice.

"Do we need to go or do we not need to go?" he told Autosport. "Pirelli can decide that and then it lets the FIA know what it thinks it needs to do.

"The worst thing for F1 will be if we go to Australia and we have a problem with tyres. Do we want that? No," he continued. "If going to Bahrain sorts that problem out, we go to Bahrain.

"Does it cost more to go to Bahrain? Yes, absolutely. But how much will it cost if we don't race or have a problem in Australia? That's not cheaper. The last thing we want to do is look foolish."

Having secured its third successive constructors' title, Mercedes boss Toto Wolff isn't so much bothered by cost or logistics, rather the timescale.

"It shouldn't be like this," he said. "We can't find out in October.

"We have all been given targets of where we expect the tyres to come in, and to be fair, Pirelli have a variety of opinions on the downforce levels for next year.

"There were teams that wanted the regulations to change, that said we were scaremongers because we expected the downforce to be coming in on a high level. Then suddenly we find out and, 'oops!' It's really much more than we expected.

"Then there are the teams that don't really release information, and Pirelli is in the dark about what to expect for next year. It's not a good situation."

Meanwhile, Pirelli waits on a decision.

"I don't know what will happen," the Italian manufacturer's racing manager, Mario Isola told Autosport, "I have no idea to be honest. It's quite balanced.