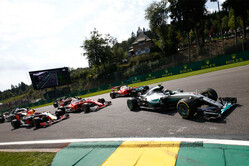 Since the 2016 Formula One season recommenced at Spa, the Pitpass team has been busy discussing a Belgian Grand Prix that created more than one talking point.

It's a podcast with a difference, as the trio of Chris Balfe, Mat Coch and Max Noble discuss and analyse the impact of the race on the sport as a whole. There's much gnashing of teeth and even a little wailing over Max Verstappen, and the tactics the young Dutch (or Belgian, delete where appropriate) employs.

More than that though, Balfe traces the Red Bull driver's approach back to its genesis moment in the sport, and it's not quite where you might expect.

Kevin Magnussen doesn’t escape without a mention, and though the team stop short of awarding points for artistic merit they do suggest that such incidents are a warning shot across the bows of the sport.

Furthermore they ponder whether that such a crash has happened, and that Magnussen escaped virtually uninjured, is perhaps one of the reasons drivers like Verstappen can employ the tactics they do.

It’s a real chicken and egg episode which inevitably leads the team to ponder whether the sport is a sport or if the sport isn't a sport and the sport has become not a sport because sport doesn't sell as well as sport used to. Sport.

Then again, maybe it's just business and we should be happy we've got a show to watch, and that it's not been cancelled by fat cat television execs as audience numbers fall.

In amongst it all there is the question of Nico Rosberg as Coch and Noble try to work out exactly which version - Nico or his evil twin - turned up in Spa, while also trying to calculate exactly where Lewis Hamilton should have started the race from in light of all those penalties. Somewhere near Brussels was Balfe's guess.

Unlike team radio it's not all moaning, profanity and negativity - OK, just a little - with members of the team calling on Charlie Whiting to take action for the interruptions and disagreement. It's all got a bit like the school yard out there, fears the team, with drivers rushing to tell teacher - in Verstappen's case, while holding scissors.

Still, Max Noble has the solution to all of F1's problems with a neat little rule change that could be enacted next week. It's a simple, elegant and fuss free way of managing penalties. So, of course, it will never happen.