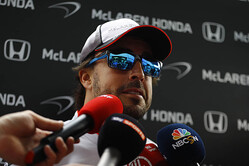 Fernando Alonso has come to the aid of under-fire Red Bull driver Max Verstappen following a number of controversial incidents during the Belgian Grand Prix.

The Spaniard insists that the Dutch sensation’s blocking of Kimi Raikkonen as they headed up the Kemmel Straight to Les Combes last week was entirely within the rules.

"There is a rule that you cannot move in the braking zones, or you cannot move when a car is not alongside you," the two time world champion told reporters on a day when Verstappen appeared to be the subject of every conversation.

"There is one movement allowed as long as you are still in front of the car behind," he continued. "I don't think Kimi was side-by-side, and Max moved and put him on the grass. It was very late, but maybe he didn't judge where Kimi was. But Kimi was still behind so the rule, as is written, is still applicable."

However, in terms of Verstappen's tactics in the braking zone, the Spaniard was not so understanding, referring to the clash, again with Raikkonen, in Hungary.

We cannot confuse fans about two completely different incidents in the middle of the straight, like Verstappen or Kimi, or the braking area like what happened to me in Australia where I misjudged the braking point," he said. "Also in Hungary, on that occasion, I felt Max was moving a lot under braking into Turn 2 and was way too aggressive.

"We spoke about that in Germany in the drivers' briefing," he confirmed. "All the drivers were not happy with Max in Hungary because it was under braking for Turn 2, and you cannot move in the braking zone. But in the middle of the straight you are allowed to do one move as long as the other car is alongside you. So everything fits with the incident in Spa."