Whiting has words with Verstappen 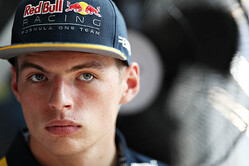 FIA race director Charlie Whiting has spoken to Max Verstappen about his driving standards in Belgium.

The talk between Whiting and the Red Bull driver follows a private chat between the FIA official and Ferrari drivers Sebastian Vettel and Kimi Raikkonen last night as the numerous incidents involving the trio continue to dominate conversation, be it in the paddock or on social media.

"I think Charlie was keen to show him a replay of Spa," Red Bull boss Christian Horner told Sky Sports. "It was, if you like, a gentle warning to say: ‘Look, if you do that again that will probably be a black and white flag'. I'm sure he has taken it on board."

The black and white flag Horner refers to is that which is shown for unsporting behaviour. It is shown only once. Should a driver repeat the offence he is shown the black flag, which means disqualification.

Referring to the incident which saw the Dutch driver cut across Raikkonen on the Kemmel Straight forcing him to brake, Horner admitted: "Max made a late move there, right on the limit.

"But what I hadn't realised is that Kimi was instructed to give the place back, but didn't give it back until the bus stop chicane where he could then DRS up to La Source, DRS up to the top of the hill and that all added to the tension and frustration for Max which was probably a contributing factor to why that move was on the limit," added the Briton.

"His car got damaged in the first corner which I don't really feel was down to him, not at all," said Horner. "He's young, he's aggressive, he's hungry and I think part of what makes him such an attractive driver is this sheer determination that he's got.

"We often forget he's eighteen," he continued, "and like any eighteen-year-old, the criticism seems to be going in one ear and out the other.

"He really doesn't care, he's focussed on his own job, he's not intimidated by the surroundings he's in and I think that's what marks him out as a real talent and star of the future. We're all here talking about it and it's that spirit he's got that is bringing fans trackside.

"He's in his third year of racing so he's learning all the time. Some of his moves have ruffled some of the more established guys, some guys have come out in support of him, but I think it's a curve that he's on that he'll look back on that, he'll learn from it and probably faced with the same scenario he maybe would have committed to that move a little earlier."

Whiting is due to meet with all three drivers again tonight at the drivers briefing, some predicting it could be a marathon session.