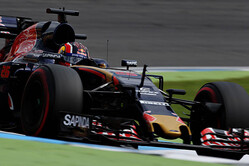 Daniil Kvyat: "We pushed quite hard today and after the red flag there was some hope - at one point it even looked like we could dream of scoring some points... I think we did a great job with the tyres, but we started to struggle with straight-line speed and the deficit was more and more obvious after the second pit-stop. It's a shame, but at least we can say we did our absolute best today. Unfortunately not many people will see this, as we only ended up P14 and out of the points, but it's not that bad. We will have to take our opportunities at tracks that suit us better."

Carlos Sainz: "How frustrating to have to retire from the race because of a puncture! I did one of the best starts of my life and by the end of the first lap I had gained seven positions and was racing in P7... But I then went over some debris from other cars at the start of my second lap and the tyre ended up exploding after Eau Rouge. It definitely wasn't the best moment of my life, especially after doing such a good start! It's frustrating to have to end the race like this, but I will keep fighting and forget today as quickly as possible."

Franz Tost (Team Principal): "Even before arriving here we knew that Spa - and also Monza - would be a difficult race for us, because we have the disadvantage of running last year's engine. This was actually the case in the end and it also hurt our qualifying pace yesterday, as we ended up P15 and P19. Today Carlos did a fantastic start and gained seven positions during the first lap, racing in P7. Unfortunately, he had a tyre failure. I assume that the tyre was destroyed by some debris from the collision in the first corner and therefore Carlos had to retire. Daniil performed a very good race. Strategy wise, the team also did everything correctly, but in the end our lap times were simply too slow to score some points. We will now analyse everything and hopefully we will come back stronger, especially in Singapore. Before that, let's focus on another tough race for us, the team's home Grand Prix in Monza next week."