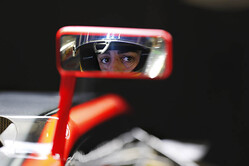 Fernando Alonso and Jenson Button respectively set the 15th and 17th fastest times in qualifying this afternoon, but will start tomorrow's Austrian Grand Prix from the back of the grid after each receiving 25-place penalties during this weekend's event.

Fernando set the 15th-fastest time, but will receive a 25-place grid penalty. This is composed of fifth ICE (10 places), fifth TC (five places), fifth MGU-H (five places) and a new gearbox (five places). As a result, he will drop to 19th on the grid, and will serve the remainder of the penalty in the form of a drive-through penalty early in the race tomorrow.

Jenson set the 17th-fastest time, but will receive a 25-place grid penalty. This is composed of sixth turbocharger (10 places), sixth MGU-H (five places), fifth ICE (five places) and fifth MGU-K (five places). As a result, he will drop to 20th on the grid, and will serve the remainder of the penalty in the form of a 10-second stop-go penalty early in the race tomorrow.

Fernando Alonso: "The car felt good today - the new aero package means it feels more competitive in the corners. It's just a bit unfortunate that this is a high power-effect circuit, so we can't maximise everything. Still, we're moving in the right direction, which is very positive.

"We've had a lot of problems throughout free practice, so we definitely need to improve reliability, and we'll have some extra penalties when the race starts. It's really a learning weekend for us - we're running the cars in different configurations - but hopefully that will increase our learning.

"It's going to be a difficult grand prix - a little bit painful - but hopefully we'll get a lot of answers in the race tomorrow, and then use that data in the test next week."

Jenson Button: "I was one of the first to cross the finish line in Q1, so everyone had a bit more time to improve while the circuit was drying.

"But I enjoyed it out there - it was actually a lot of fun. When the surface was tricky and unpredictable, I was looking pretty good, but once the circuit dried - and other people found their feet - I was only able to do what the car could do. I think there could have been a chance of getting into Q3 if the conditions had remained mixed.

"I also thought I was going to have a good battle with Fernando tomorrow, but we'll get different penalties so I won't be racing him. This just hasn't been my weekend."

Eric Boullier, Racing director: "When you embark on a qualifying session saddled with the discouraging foreknowledge that your two drivers will be given a combined total of 50 grid places by way of penalties, it's not easy to keep one's chin up. But McLaren-Honda is one team, and our esprit de corps is truly edifying.

"Moreover, despite the fact that we'll start tomorrow's race from the back of the grid, and notwithstanding the certitude that our drive-through and stop-go penalties will disadvantage us further, there are in fact reasons to be cheerful today, tricky to spot though they may be.

"It's a fact, for example, that our aero upgrades have delivered a useful performance step, and in future we can expect that positive increment to translate into track position and indeed world championship points. But that won't eventuate tomorrow, obviously.

"Nonetheless, both Fernando and Jenson will race their hearts out tomorrow, as they do always, which sterling efforts will in my view be rendered all the more admirable by the inevitable fact that they will go unrewarded when it comes to allotting the scores on the doors at the end of the afternoon."

Yasuhisa Arai, Honda R&D senior managing officer - chief officer of motorsport: "Unfortunately, we had incidents during FP3 that once again limited our running time. While the end results of qualifying were still disappointing, the team effort between FP3 and qualifying to get Fernando back out on track was incredible.

"Although we will suffer from grid penalties tomorrow, I hope that the combination of the power unit and chassis changes will lead to a better set-up for the race."