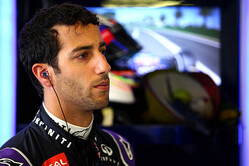 Fernando Alonso and Red Bull drivers Daniel Ricciardo and Daniil Kvyat are likely to start from back of the grid on Sunday.

As the power unit table reveals, after just seven races some drivers have already exceeded the (four for 2015) limit, with others sure to follow.

With penalties inevitable, some teams are approaching the issue strategically, opting to change power units and components at circuits where the penalties will be less harsh than others. Red Bull, in particular, believes that Silverstone and the Hungaroring will suit its chassis, and therefore is likely to take the hit here, ironically its home race.

After weeks of speculation, both Red Bull drivers are expected to take on new power units this weekend with the inimitable penalties.

"It's likely," said Ricciardo, when asked about the speculation. "We're definitely looking into it. I think we'll have a decision probably by this evening as to what we'll do this weekend.

"It's likely we'll take a penalty here," continued the Australian who will have a new chassis this weekend. "If it's not here it's in the next few. We have to see as well what chance we have coming up in Silverstone and Budapest. Wouldn't be a surprise if we see it here but probably a few hours away from a decision."

Likewise Fernando Alonso at McLaren, where an updated unit from Honda will be paired with a number of updates to the MP4-30, including a new shorter nose and revised front and rear wings, that will only be available for the Spaniard's car.

"Honda is making updates to Fernando's power unit which will be confirmed on Friday morning," said a spokeswoman for the Japanese manufacturer. "As a result, we are expecting grid penalties."

However, in terms of engine and chassis, Alonso admits that this is no quick fix.

"It will be another weekend where it's going to be tough," said the Spaniard, "where the results will not look good especially because there are probably some penalties to pay, so I think it's going to be a test weekend for us.

"There are some updates on the car, so hopefully we go out of this weekend with some answers and there is the test next week as well. I'm quite optimistic with the things that are coming to the car and for the near future but as I said in terms of result it will not change too much this weekend or probably it will be even worse."

One man who will be watching Alonso's progress - or lack of it - with interest is teammate Jenson Button, the Briton hoping that the improvements to chassis and engine prove significant.

"Every race we are bringing something and that's why there are not two of everything because when you are in our position you have to just keep fighting and bringing stuff to every race," Button told reporters. "If we were at the front now this package wouldn't be on the car because it's only on one side of the garage. It would always be fair and on both sides. But because of the way it is we need to bring everything we can.

"It has to be this way for us and it's been like that all the way," he added, "we've shared it out very well and it will continue like that for the next few races.

"It's going to be a tough weekend whatever happens," said the Briton, who may also take on a new power unit. "I'd love to get a result this weekend but that is not going to be the case. I don't want to say it's a test weekend because I want to come here and race. So we'll do what we can to compete."