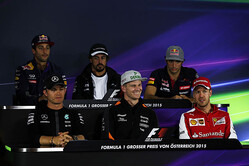 Nico, if we can start with you. First of all, congratulations on winning Le Mans, a great achievement, especially at your first attempt. How was it?
Nico Hulkenberg: Yeah, it was quite amazing obviously. A very intense and long week. I flew from Montreal to Paris and then straight to Le Mans. But yeah, to come there, first attempt, and to win it with my team and my team-mates has just been incredible. You know, very emotional moments and a great experience that I don't want to miss obviously, so very proud about what we've achieved there.

In Canada we saw a performance lift for Force India, scoring points again and also for yourself. There's a B-spec car coming relatively soon. So how optimistic are you, looking at the future?
NH: Yeah, quite, to be honest. I think, like you say, recently we've made good progress, we had a car in the points four of the last five grands prix, so we see signs that it is getting better. In Silverstone we'll get some new parts and major upgrades, so I really look forward to those. I'm quite we can have a really strong second half of the season, which hopefully then will make up for the first bit, which wasn't quite to plan.

Thank you very much, Nico. Daniel, coming to you, Canada was a very difficult weekend and you left not knowing what the problem was really. There has been talk about chassis, replacing [it]... Have there been any solutions implemented and did you identify the problems in Canada?
Daniel Ricciardo: Yeah, we understood quite a lot post-Canada. I think a lot of it as well was... I probably came in there quite in a way emotional from what happened there a year earlier and probably just hoping for too much. So that already probably set the target too high from the start and it sort of spiralled into a poor weekend, for obviously some other reasons as well. We come here now with let's say a fresh approach on it all. I have a new chassis. I think we've got any variables that were maybe there in Canada and ready to have a good weekend. We know the track doesn't realty suit everything for our performance right now but hopefully have a good weekend here in front of the home fans.

There's also been talk about you replacing engines and taking penalties here at a track that is probably not the best for you guys. Would this be the most sensible option this weekend?
DR: It's likely. We're definitely looking into it. I think we'll have a decision probably by this evening as to what we'll do this weekend. It's likely we'll take a penalty here. If it's not here it's in the next few. We have to see as well what chance we have coming up in Silverstone and Budapest. Wouldn't be a surprise if we see it here but probably a few hours away from a decision.

Thank you very much Daniel. Moving on to you Nico Rosberg. Monaco last year seemed to be a turning point in your championship challenge and this season seems to be shaping up the same way. Is that your impression?
Nico Rosberg: I don't know. I don't think so much about the past or things like that. For me it's now. Lately, yeah, it's been going OK. Of course, Canada not such - I lost out there. But I'm feeling good, feeling good. It's great to be here; I won here last year, so arriving here very optimistically, we have a great car, so it should be a great weekend.

Speaking about the car, Lewis recently said he's feeling much happier with the 2015 car than he was with the 2014 car. What's your impression?
NR: Pretty much the same. It's very similar, you know, because not much has changed in the regulations, so it's just ongoing development, so it's very similar.

Thank you very much Nico. Moving on to Carlos now. Carlos this is a home race for the Red Bull family but probably not the best suited to the Toro Rosso's strengths, but neither was Canada and there you finished very close to the points, you finished ahead of the one of the Red Bulls. How do you see this weekend panning out for you?
Carlos Sainz: Yeah, it should be another quite difficult weekend. Probably not as difficult as Canada because Canada was really not playing to our strengths because there were not really any high-speed corners, it was all either slow speed or a long straight. Here we have a couple of really quick corners that we know that our car is quite strong over there. We are also bringing a couple of upgrades that should also make us a bit quicker, and from there on expect another tough weekend, but maybe not as tough as Canada.

We're almost half way through the season and how do you rate it so far, because it's been a pretty good start?
CS: Yeah, I must say I am very happy with how things have gone in the first seven races. I think it has been a great achievement by all the team, especially with all the small problems we are having. The car is very, very competitive; it's a great car to drive. Also the team is helping me a lot in all the areas to improve. I keep learning; every single time I go out in the car I enjoy, I learn. I'm very happy with it. Also there were a lot of new tracks for me, something like four or five new tracks, so it's been a good first part of the season for sure.

Thanks very much. Moving on to you Seb: a pretty promising performance in Canada, despite the penalties on the grid. Given the package you have at the moment, and also considering a good grid start, a positive start, how do you see this weekend panning out and do you see yourself challenging for victory here?
Sebastian Vettel: I think ideally we always try to fight for the win. I know that we have a strong package this year, a strong car, so if everything goes normal then we should be a little bit further up again, especially on Saturday this weekend. In general, looking forward to the weekend. It's a great place, a great venue. I think all of us really enjoy coming here. But we also have to be realistic [in] challenging the Mercedes. We know that first of all we need to have a flawless weekend, a perfect weekend and maybe hoping for them to have a little bit of a struggle. But in normal circumstances it is quite difficult to beat them as they are still the favourites going in and there is still quite a big gap.

Canada, again despite the penalties, seemed to be a pretty enjoyable race for you, with all the overtaking moves, the fights on track. How good was it to have to battle through the field?
SV: For sure it was more entertaining than the races before. It's normal when you come from the back. Obviously first of all you go through cars that are slower than you. In general, obviously it was busier and at the end once I had my position I think I could extract a little bit more the pace of the car. But overall it was quite exciting and it was a good recovery, valuable points. We avoided all the risk in the opening lap which is always a bit messy if you are in the back of the field, but fortunately it all worked out and as I said we could get good points.