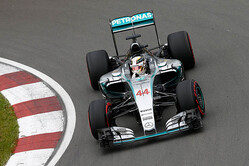 "Lift and coast," was the call to Lewis Hamilton in Montreal, but what does it mean?

"Lift and coast" is the most effective technique for driving flat out but doing so in an efficient manner that enables fuel consumption targets to be hit. This technique achieves a faster overall race time than would be possible by carrying additional fuel and driving "flat out" from start to finish. Just as important is what lift and coast is not, i.e. coasting into a corner a long way below the theoretical limit of performance.

Once a car has accelerated up to full speed, it will run at a fuel flow rate of 100kg/hr - the maximum allowed under the regulations - meaning that the engine is producing as maximum power for that period. The driver will then lift off the throttle and go straight into the braking zone, through the corner apex, and accelerate out again. This is how to produce the fastest theoretical lap time. In terms of fuel consumption, however, the most effective way to use less fuel on a straight is to get down it as quickly as possible and then lift off. At this point, fuel consumption falls to practically zero. With lift and coast, what the driver is actually doing is coming off throttle towards the end of the straight, slightly before the natural braking point. During this period between full power and braking, the car is then decelerating purely from aerodynamic and tyre drag - and pretty quickly, too. When a car is travelling at 300km/h there's an awful lot of drag force on the car - a deceleration of 0.9g, similar to an emergency stop in any normal road car. Once the coasting distance has been covered, the driver then picks up the original braking profile. This is far more than simply coasting into a corner as might be perceived...

When a driver deploys lift and coast for a distance of an additional 50m, for example, the car is completely off throttle for that period. So, as opposed to covering the last 50m at 100kg/hr, it's doing so at 0kg/hr. In terms of the time taken to cover 50m at 300km/h as opposed to 280km/h, we're talking about a difference of mere hundredths of a second. But the fuel saving is significant - a few grams each time. Then, when the driver picks up the normal braking profile once more, they are rejoining the same curve that they would normally follow. Overall, the effect when doing small amounts is practically zero. It's only when deploying higher levels of lift and coast, like we saw at the end of the Canadian Grand Prix, that it really becomes noticeable. Even in the most extreme cases, such as Montreal, the maximum you would expect to lose is around three tenths of a second per lap - still a relatively small number - and, generally, when a driver is asked to do lift and coast they'll be losing in the region of half a tenth to a tenth. It's a linear process - so doubling the lift and coast gives double the fuel saving.

The reality is that, even at a circuit which is not fuel limited, it is often quicker over the course of a race distance to use lift and coast. The basic principle is this: running less fuel saves weight - and a lighter car is a faster car. If you've got 100kg of fuel to complete a race but can run half the distance with lift and coast, you might be able to use 3kg less. If starting that race 3kg lighter enables a driver to go a tenth of a second per lap quicker without any lift and coast, by the time they're 30 laps into the race they might be three seconds further up the road. This could buy a position at the pit stops, gaining vital track position, and the driver can then save fuel later to compensate. So, teams use lift and coast strategically to produce the most effective race strategy.

There is no more efficient way to save fuel in the current formula than lift and coast. Any other method of dropping consumption costs more lap time. Attempting to save fuel by applying the throttle more gently, like many people will do in a road car to keep their MPG down, means the car takes much longer to get up to speed. Similarly, reducing the fuel flow rate of the engine will mean the car takes longer to get down the straight. In Formula One we're concerned not just with the amount of fuel saved but the time lost in doing so - and a huge amount of time would be lost by using either of those techniques.

Another reason lift and coast featured prominently in Montreal is that it is very good for saving brakes. When travelling at high speed, energy increases as a square of the speed - so, as you double your speed, you produce four times the energy. When a driver lifts off rather than hitting the brakes, they're letting the air absorb some of that energy as drag on the car and the tyre - without putting any energy into the brakes. That initial phase of braking, when the car is travelling at the highest speed, is where energy levels are at their highest. So, lift and coast is also incredibly effective at managing brake temperatures.

In terms of additional effects - a small amount of energy harvesting) on the MGU-K (the process by which the battery is charged when the motor works as a generator) will be lost because for a period of the potential maximum braking zone the car is coasting. Lifting off rather than braking does mean that some charge is lost - but again, the net energy benefits are always going to be positive. The MGU-K has a certain power capacity and harvests as a function of how long that power is generated under braking. There aren't many circuits where a driver will struggle to harvest the full 2MJ/lap energy allocation from the MGU-K.

In normal circumstances this is a fairly minimal risk of a driver being prone to attack from behind. Any lift a driver does will only cost a few hundredths of a second and, at the end of a straight, the car will be covering eight metres in 0.1 seconds. So, generally speaking this represents a couple of metres. Apex speed will be exactly the same and the latter part of the braking curve will be exactly the same, so there is no further loss. In any case, unless a race has been badly planned or a driver runs into issues, they won't be performing lift and coast in the heat of a battle with a competitor breathing right down their neck at the end of a race. The team and drivers discuss where lift and coast can be used sensibly at each circuit. Generally, the zones where it is most efficient are also those where they would choose to overtake. But, if they have somebody right on their tail, it is possible to do more of it in the infield, for example.

Fuel saving has always been a factor in racing but, in terms of lift and coast specifically, the technique has been common in Formula One for the past five years. It was sometimes used during the early days of the V8 era but became more prominent at fuel limited races following the ban on in-race re-fuelling from 2011. That's when teams started carrying a fuel load for the entire race - and carrying less means the car will be faster from the outset. It is now more common because, under the 100kg race fuel allowance, we would never fuel a car to go flat out every lap - that's just not the quickest way to run a race. A team will always plan to start the car light, go flat out and then save fuel later on once the race order settles down after the pit stops. This was less of a factor when in-race refueling existed because we weren't carrying such a large amount of fuel for such an extended period of time. But now that we have races where we might carry six kilos less fuel on the start line than we could potentially consume, and certainly a few lighter than we would choose to run without having to consider strategic factors, each team is forced to do it.

Perfecting lift and coast as a technique is not an easy thing to do and drivers spend a lot of time practicing to get it right. They spend their early careers in junior formulae going flat out until the point at which they decide to brake - jumping from throttle to brake instantaneously. When you start asking them to lift and coast, what they tend to do is get their braking points wrong. By coming off the throttle earlier, they reach the first phase of the braking zone at a reduced speed and have to adjust their markers accordingly. For lift and coast to be efficient, it's vital that the driver gets back on to the original braking trace at the correct point. The ones that can do it well are those who can make a significant fuel saving for a very small amount of lap time loss. It's become a real skill and is certainly more difficult than driving flat out. All drivers now want to know how efficient they are being, as fuel saving has become an element of competition - particularly between team-mates. Whoever can do the most efficient fuel saving and start with the lightest car will gain an advantage in the early phases and / or have more in reserve to attack at the end of the race.