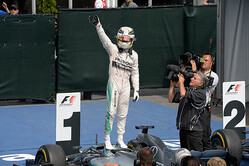 Lewis edges Nico in tense Canadian Grand Prix battle to take 20th 1-2 finish for the Silver Arrows in Formula One!

Lewis converted his fourth Canadian Grand Prix pole position into a fourth victory at the Circuit Gilles Villeneuve to take his fourth win of the 2015 season. Nico finished P2 to complete a fourth 1-2 of 2015 for the team - the 20th for the Silver Arrows in Formula One. Lewis now leads Nico in the Drivers' Championship by 17 points, with Mercedes AMG Petronas heading Ferrari by 105 in the Constructors' battle.

Lewis Hamilton: I love Montreal! It's really special to win here again - the place where I had my first win back in 2007. The team did a fantastic job, so a big thank you to everyone. I wouldn't say it's a relief because I've had good pace for both of the past two races - I'm just happy to get another win for me and the team. It was quite close after the stops. I think because Nico was in my tow he was using less fuel, so I was having to save a bit while managing the gap. It was really just about matching the times each lap. I had a couple of lock ups but luckily they weren't too bad and not enough to cause any real problems, so I felt in control. On behalf of everyone in the team I'd like to dedicate this to my engineer Bono's father, who passed away last week. Bono has had a tough time but he's been fantastic all weekend, so this one is for him.

Nico Rosberg: It was a tough race, with tyres, brakes and fuel all on the limit. The problem for me was to cool my brakes behind Lewis. I had to take different lines to get some fresh air. In the last 10 laps I ramped up the pace and started to attack by using some of my electronic Hybrid power, which I had saved until this point. But the problem is that your team mate's engineers always have knowledge of your activities and can ask him to ramp up the pace too. So, he was mirroring what I was doing and there was no chance of a surprise attack. That was a bit of a shame - but it is how it is. Really, I lost it in qualifying so I need to do a better job there and get together a perfect weekend like in Spain. I'll move on now and look forward to Austria, where I have very good memories from last year with my win.

Toto Wolff, Head of Mercedes-Benz Motorsport: Today our guys on the pit wall did the perfect job managing the fine line between allowing the drivers to race each other and keeping the cars healthy so we made it to the finish. Montreal is the toughest circuit of the year for fuel consumption - and the toughest for brakes, too. With no Safety Cars to spice up the action, we had a straight, flat-out fight between our two boys across 70 laps - and it was a real battle. But running one stop, which we felt was the quickest strategy, the boys had to manage the cars during periods of the race, too, as has always been the case here in Montreal. After the stops, it was very cat and mouse, with Nico saving his brakes for a charge at the end - and Lewis conserving fuel to have margin to defend. Then, when they went for it in the final 10 laps, it was very tense indeed - but they did the perfect job to keep it under control. We needed this result today, after all the discussion and criticism following Monaco, and it was good to do it with a faultless performance. I'd also like to highlight two great stops from our boys today in the pit lane - both of them clean and quick and efficient. Congratulations to Lewis for his win but also to Nico for such a strong drive; there were only fine margins between them in qualifying and in the race, and that rivalry pushes the whole team forward. It was great to see Valtteri on the podium, too. A 1-2-3 for Mercedes power after all the hard work that went into the updated engine we ran this weekend is just a great job. But we know we didn't see the true pace of Ferrari today, either, as they had a bit of a messy afternoon. So we will keep our feet on the ground, keep our heads down and keep on pushing.

Paddy Lowe, Executive Director (Technical): Another fantastic result for the team. In the end, our greatest difficulty today was allowing both drivers to race each other in a situation where a lot of vital parameters were on the limit - fuel and brakes in particular. This circuit is tough on many elements of the car and asking drivers to manage those demands is not necessarily the easiest thing in the heat of battle. That put a lot of pressure on the pit wall, as we wanted to allow the drivers to race and put on a great show while also managing the cars home to ensure another great result for the team. I have to say that everyone performed superbly, so the success was well-earned. Congratulations to Lewis on his fourth win in Canada and also to Nico on another strong podium this year.