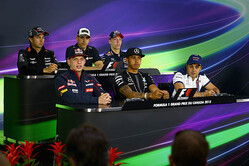 If we could start with a general question to all of you: obviously the story in Monaco, of the race, was triggered by the safety car and here in Montreal 11 of the last 17 races have featured at least one and as many as four safety cars. Can you speak about what your first thought is, as a driver, what kind of communication you have with the team at that time and what are the most important things to take care of from a driver's point of view? Felipe, maybe you could start.
Felipe Massa: Well, I think, first of all, it depends on the track. You have some tracks that you have more possibility of accident, or are more difficult, more easy to have a contact or crashes or low grip from the asphalt, which is like Monaco. Maybe here a bit more, a bit better, but with all these chicanes, with the wall nearby, so it's very easy to have an accident or to crash - I know very well from my past, especially from last year. But I think you always need to be very close to your team, understanding everything happening in the race, the safety car and the strategy. The communication counts always and you can gain position or maybe get a good strategy if you are doing things in the proper way.

Sergio, what do you like to make sure you take care of at a time like that?
Sergio Perez: I think it's important to make your team make the decisions. Don't speak too much at certain points of the race, for example if there is a critical situation with the safety car out. This track, for example, it's quite easy to have a crash, every single lap there is a risk. There are certain corners where you can simply not do any mistake, and if you do a mistake you will definitely end up in the wall. This track is one you should definitely take care of for the whole race.

Max, as a rookie, what's the first thing that goes through your mind when you hear that the safety car has deployed?
Max Verstappen: It also depends on where you are on track, where you qualified. For sure, here for me will be an interesting race. I will have to hope for a safety car. Depends also how hard the track is for the tyres. All those things you take [into account] before you make a decision and you also talk to your team quite a lot because they have a lot of data and they see where you are on the track compared to other competitors.

Lewis, your thoughts on it? What do you like to take care of when you hear that the safety car has been deployed?
Lewis Hamilton: I think you just have to stay cool and follow the procedures that you know and also the feedback that the team gives you.

Pastor?
Pastor Maldonado: Yeah, maybe it's a very crucial moment for the race - not only for the driver, but also for the [pit] wall, for the team. The strategy can change immediately, so you must be very alert for whatever is the team call and, yeah, respect the procedures and trying to gain places.

Daniil, final word?
Daniil Kvyat: Well, as you hear the safety car is out, I think you just speak with the team, what's happening around you and rely [on them] because they know all the gaps with the other cars and so on. And then you make a decision, together with the team, and then once you stay out or anything else, it's a calm period, you just look after the temperature of the tyres and nothing else.

OK, thank you for that. Coming back to you Max, a big crash in Monaco and you're carrying a five-place grid penalty this weekend in Montreal as a result. What did you learn from that whole episode, that experience, and how do you evaluate your performance overall during that Monaco weekend?
MV: I learned the cars are pretty strong. I was happy about that, that I didn't have any injuries. I'm happy... I didn't have any problems after that, I went go-karting on Wednesday, so I was fit again. Yeah, I will have some work to do on this track, but I think it will not change me as a racing driver. I will keep fighting and especially when you want to fight for points, I will still go for it.

Lewis, coming to you, obviously it's been a happy hunting ground for you over the years: three poles, your first ever victory, from pole, in Formula One, back in 2007, three wins in total. Is this the ideal place, then, for you to bounce back from what must have been an extremely painful experience two weeks ago in Monaco?
LH: It's a good track. As you said, I had my first grand prix win here, so generally always been relatively quick here. More so, just to have a better weekend than we had last year here. So that's the target.

Daniil, coming to you, a career-best fourth last time out. How much of a confidence boost was that result for you in Monaco? One interesting stat for you is that you've yet to finish the finish the first lap of a race this season in the same position you started, so maybe you'd like to say a little bit about that?
DK: Yeah, I mean, the Monaco race was a very good race. We had a clean weekend all day long. I think we saw as a team how important it is to have a clean weekend and, yeah, we grabbed quite a lot of points as a team as well. I hope it is a very good confidence boost for all of us in the team, that's what we needed, and now we hope to keep growing from there onwards. I hope it's going to bring us something else in the future.

Pastor, your run of bad luck seems to have continued - now five retirements from six races. What's the team saying to you and what is your mindset going into this weekend?
PM: Yeah we have been very unlucky, especially because we have been having a few different problems during the races, but on the other hand we have a competitive car, which gives us the opportunity to try again and do our best. Let's re-try again this weekend. This should be a good track, a good opportunity for us. I've been always fighting for the points before the problems we had, so there is not any point to don't do it from now to the rest of the season.

Felipe, coming to you: on a positive note, you've got over double the points at this stage, after six races, that you had in 2104 at the same stage. But looking at your record here, why is it that Canada has never been a particularly happy hunting ground for you?
FM: I don't know, so many things happened on this track with me, to be honest. I always drove pretty well here. I was always having competitive races. So I hope this will be the good one.

OK, and Sergio, finally with you, obviously you matched Force India's best result of the season so far in Monaco, with seventh. You were running second here in the closing stages last year before the accident Felipe mentioned and you were on the podium, back in 2012, so what are you feelings on this track?
SP: This track is definitely one that I really enjoy: it's just like driving on a karting track. I really, really enjoy this place, doing a lap, having a race here. It's quite demanding mentally, because, as I said before, it's a track where it is very easy to make a mistake. I have had a couple of good runs here; as you say back in 2012 I was on the podium. Last year I was very close to win the race but unfortunately later in the race I had some issues and then the contact with Felipe came but up to that point it was a great race and so close to actually win the race. I hope... this year we are in a different position, but we can definitely make it into the points.